Jura to Islay - the adventure escalates

on July 25, 2010
My temporary crew would be let off at Islay and Mare Liberum would continue further south. We made a stop at a mooring in Jura, just outside of the distillery, the pub was alive, and the whiskey was great. However, the shop was closed, there would be no food at the bar, and there was some rowing distance to the pier and back (very beautiful at night though, with sea gleaming of fluoricent plancton that drifted by after every stroke of the oars like tiny starfalls).
In the morning, I sent the boys off to get some petrol. Myself, I was sleeping extra since I got a cold and was feeling quite miserable - but the captain cannot get a sick leave so I needed to get well, the sooner the better. The boys seemed to really take their time, I had slept well and had breakfast but they were still not back. I smsed them asking how it went but I guessed they were discovering the distillery... Suddenly, reading down below, I heard some voices, and came cheerfully up to meet the boys, just to hear an engine of a big boat just beside ours, bumping into our side. I threw myself up the deck to fight off the intruders, but that was the Jura passenger ferry, droipping off the boys and the dinghy they went with. The boat turned and went away - before Daniel got onboard, leaving him hanging over one of the sides, risking his pride and his mobile phone. We pulled him in.
It turned out that the dinghy has been run over while being parked at the petrol station, probably by that same passenger ferry. One of the oars was so badly damaged that there was no use for it. Luckily, the dinghy itself was fine and the petrol containers too. We set off and the crew got a breakfast.
Our plan was to get to Port Ellen, or to Lagavullin Bay, where there are visitor berths and the distilleries are lined up: Lagavullin, Laphroaig and Ardmore. But we never got that far. 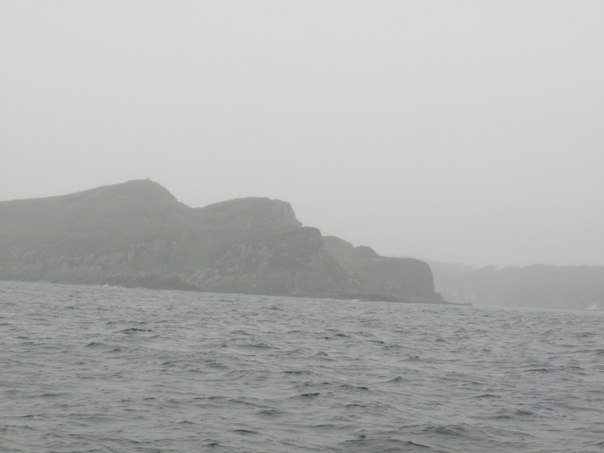 Past the Sound of Jura, the fog was rushing in. The visibility dropped. The head wind was fresh and we were making way by engine instead. The waves were tricky, some tide meeting zones outside of Islay's south-east coast were making them sharp, uneven and quite high. The engine was complaining, being too far up from water and revving up, or down, almost covered by the waves, stopping completely. Daniel made several attempts of restarting it, but we were making way for the shore, with underwater rocks and sharp cliffs. A fishing boat came by to ask if we needed assistance. I told Daniel to give up the engine and stand by steering, and Jocke would help with the sails. Main up - immediate fail. The halyard had got caught by the radar reflector. After some struggling, I saw that it could not be fixed easily, so I let it go and went for head sail instead. We managed to get it up in great speed, but Jocke got a bit of a beating while managing the headsail, drifting about in the boat thrown sideways, never having sailed headsail before. The crew did brilliantly, and Daniel even managed to get the engine to run on the way back, so we attempted to go around the peninsula again. We made two attempts and failed, I called a course alteration northwards, since making way was neither possible (nor safe). We put anchor in Claiggan Bay, a calm protected harbour, populated with curious seals. Luckily, we had a spare oar so I could row the dinghy to the shore.

It was longer than I thought from the safe anchorage area to the beach, so it took a good while. Two swans were watching us from the beach, and a seal stalked us, amusing the crew. We would set off to Port Ellen by land instead.