on July 27, 2010
The road on the sea chart turned out to be a narrow path enough to fit one car. The nature was beautiful, and several siamesecat-coloured sheep were trying to figure out whether to attack us, with a followed cowardly retreat to the green hills. We walked on, 20 km or so to go. 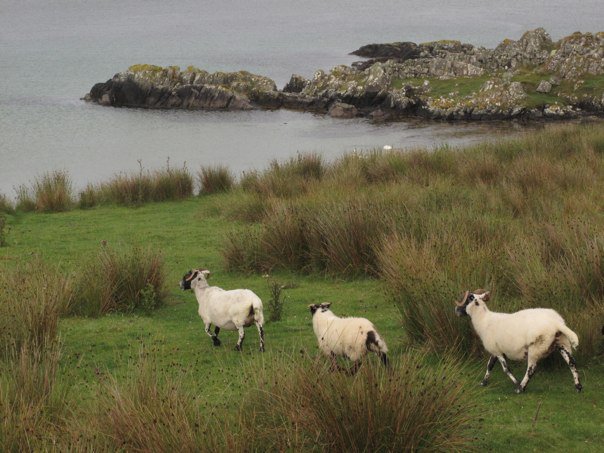 We were tired and wet, hungry and thirsty. 20 km was too much to walk. We tied to hitchhike. The second car stopped, and it was a very nice couple with lovely kids. Unfortunately, they did not have any place in the car, and told us it's a long way left. I wished them a nice day... unless they had room for three wet sailors in the trunk of the car.
I really love the kind of people who say "why not". They opened the trunk, so we sat in a row, dangling our feet over the asphalt and looking at Islay landscape fly by; hills, seal beaches, small houses, deer and distelleries, unfortunately closed for the day. Arriving to Port Ellen, we had some food and then my crew were sent off to a bar while I ran around doing magic, which was finding a ride back - or accomodation for the night.
It was Sports Day in Port Ellen. Boat races and all kinds of stuff were taking place, which meant that everyone got drunk at ten in the morning and things were not any better. I was reluctant to come in to the pubs, and that does not happen often, I tells you. The Sports day also meant that the accomodaion was extremely hard to find, all of the B&B were full, but in the end I had some luck.
I stumbled across this hotel called White Hart. I don't think it's included in the tourist listings, that cover the two or three streets of glorious but small Port Ellen, but it's worth looking for. On the ground floor, there is a lounge where the weapon fetishist might squeal with joy, a dining room, a lively front bar, and a back bar with an open fireplace. You can have Scotch specialities for breakfast, and there is a great choice of local whisky to try, which is a must. And for those who are not into whisky, there is raspberry sambucca! If you want to stay in the hotel, the whisky season starts in Autumn, so book something beforehand. It's very close to the marina, the ferry and virtually everything. Here is a link.
In the morning, we got back to the boat to get the crew’s bags since they were leaving for the airport. I rowed back again, got the boys' bags, and rowed to the beach again, which felt something like rowing from Stockholm to Finland anbd back again, and then we tried to get a taxi or hitchhike. Again, no cars came. Having trouble getting a cab, I phoned the hotel up for a correct phone number to the taxi service. The man answering the phone said he'd take care of it. But Mr Gordon did not just pick us up, he showed us the most ancient Scottish cross, told us a lot about history of Scotland and Lord of the Isles (fascinating story about a Viking becoming king of Scotland!), made a pit stop at a distillery, and actually drove us all the way to Port Askaig with a detour to Lord of the Isles Castle! A very interesting tour, and a great service. Great people here.

Here's a bit more about the whiskey areas that we sailed around.

Here, you can see all the posts about the circumnavigation, and read further.