Adventures in an under-equipped boat 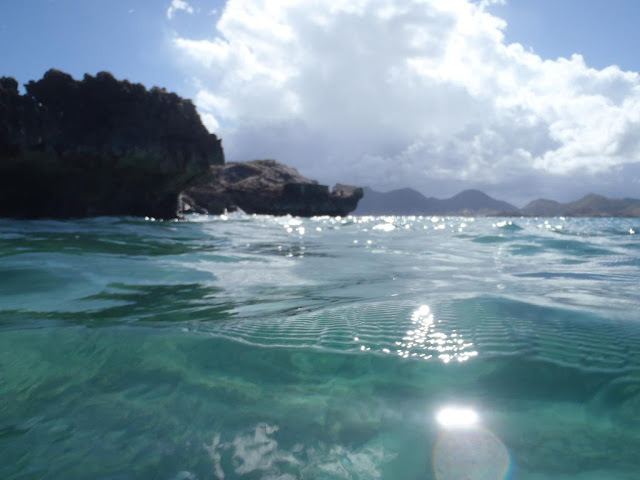 I left the BVI after a bit of a fuss – the customs made a typo and were missing some forms that I never received. However, that was figured out and I cast off from Road Town at 15:30 local time. 135 miles to Sint Maarten would be done in about 24 hours, or so I thought. How naïve not to estimate for beating against the Trade winds, the current, and the swell!

Sailing at night, in a completely stripped and almost untested boat is quite an experience. Furthermore, since I hadn't started equipping the boat, there were no electronics on board - no big chart plotter, no AIS receiver, no radar or log or depth meter, the stuff that usual long-distance sailors usually take for granted. I didn't even have an autopilot or wind rudder, which is more or less essential for longer trips. Instead, the two of us on board steered the boat by hand, in good strong headwind. Concerning safety, I did not even have an EPIRB, life raft or handheld VHF – it was a bit back to the basics. Adventurous or plain stupid - depends on your attitude towards adventure (after telling that to a local sailing legend, he answered that a friend of his crossed the Atlantic from South Africa to Caribbean alone in his 21 ft boat, with only school atlases to navigate on. So my conclusion is that I was a lot better off.)

I did not have functioning water tanks or kitchen stove, so the food on board was cold canned food. We slept in turns on the cockpit floor, taking 2 hour watches.

Upon getting close to Sint Maarten, both people on board quite tired and worn-out from beating against serious wind and not getting good sleep for about 36 hours, I realised that we will not make it to there before dark, and entering the lagoon in the dark to anchor is extremely stupid. I decided to change course for Saba instead, to grab a mooring there.

Anchoring in Saba is dangerous and prohibited. But a few moorings exist off Wells Bay, next to Diamond Rock. I headed for the, The sun was soon setting. I can already see the moorings, drop sails and start engine, getting ready to grab a buoy.

But just before the moorings are in reach, the engine dies! I unfurl the foresail and hand the lines to the crew, and try to catch the buoy. The crew does not manage to go close enough to the moorings so I put a rope between my teeath and dive in, to swim the last bit. Managed to tie the boat off during the second try. That was lucky – there was not much more margin before hitting the rocks.

There is quite a swell (2 meters or so which is uncomfortable), the engine is dead, and the batteries cannot be charged. That means no VHF, no cell phones, no nothing. We have no dinghy, we’re 200 meters away from the shore, swimming ashore is equal to death, the guide book warns.

First things first. The crew was scared and not really motivated. I whipped up a dinner of canned food. A drink from canned peach halves with rum raised the morale instantly. The wind picked up through the night, and I realized that it was in fact very wise to stay moored instead of beating against the wind back to St Martin - it would have been very rough. But now, I have an engine issue - and need to fix it immediately, to get the VHF to work and the anchoring light to function, putting ourselves in a danger otherwise.

I waited until the morning and managed to come in contact with another boat who gave me and the crew a dinghy ride to the harbor. Here, I suddenly forgot about the engine, opened my eyes wide, and stopped for a moment to take in this precious place.

Saba - The Unspoiled Queen of the Caribbean. Open the guide book and it is called "The Hidden Kingdom", "a piece of paradise", and "a story-book island". The guidebook specifically points out that if you have the opportunity, Saba should be on top of your travelling list. Well OK, now when I am stuck here, it does not seem like a bad idea to visit it.

Looking further into the guidebook, it says: just like all hidden treasures, Saba does not come easy, so be prepared for a lot of frustration in the face of the elements. The people who wrote the book knew exactly what they were talking about. Of though the boat was moored at the most protected side of the island, the wind and waves were ripping at her, and it was anything but comfortable to sway on a mooring. Saba is just a huge volcano-shaped rock, emerging steep from the sea, looking very unwelcoming, and the descent of the sea bottom is also steep - it's impossible to anchor on most spots. Forbidden even - the whole island shore is a marine park, one of the world's best diving and snorkeling spots.

But the best stuff starts on the land. It is truly a piece of paradise... When you climb up a hundred meters or so, leaving the rough coastline and the boulders behind, you are welcomed by a lush rainforest, fed with moisture by the clouds the high island is constantly combing, and nurtured by the hot tropical sun. Despite the sunshine, the climate is cooler than the rest of the Caribbean, just perfect - about 23-24 degrees. And what's best, it's completely untouched by tourism. No casinos. No discos. No crowds. No abyss-like class gaps, no rubbish, no apparent problem areas. Just a pristine rain forest, a lot of beautiful birds. Butterflies everywhere. Blue skies, blue water, small white houses with coral-red roofs. People of all nations and skin hues living side by side in peace, completely unimpressed by obstacles. The islanders greet each other and the visitors on the streets, they are constantly smiling and chatting with you, just as if you were visiting a happy family reunion.

Yes, a warm and fuzzy feeling, and a craving to stay there. The customs are friendly and unofficial, and there are amazing hotels and restaurants to return to. Here you can catch a bit of that highest luxury of today's society: Silence. Imagine hearing a butterfly's travel through some jungle flowers and leaves. And Caribbean waves at the background.

After visiting the island, and having a well-needed shower at a diving center, I was back on the boat, very impressed by what I’ve seen, but still stuck there without a working engine. What to do? When ashore, I got a phone number to the mechanic, got water, diesel and some more necessities (including a hearty breakfast). But the mechanic turned out to be an older chap who doesn't like dinghy rides, and easily gets seasick so he does not want to work inside boats. Besides, he's completely swamped with work, being the only diesel mechanic on Saba.

So I started tinkering with it myself. Changed fuel filters, tried to bleed air from the fuel system. Bleeding on, but still no progress; starting to wear out the starter battery which is no good news.

Luckily, there was a boat on a mooring in the vicinity, and I got contact with them. Since I arrived, there was one or two other boats on the moorings from time to time, sometimes there were none (on the weekend though, as many as 9 boats were there). Now, there was a steel sloop without flag, swaying right beside Space. They got into their dingy and came over to ask me what the issue was, after seeing my very frantic signs of making contact (yeah, YOU try to communicate with someone hundreds of meters away against the wind, with no VHF, mobile phone or walkie-talkie - and not look like a clown with a seizure).

The young captain (Venezuela-born, Guadeloupe-resident) turned out to be a professional mechanic, and they had the same Yanmar engine on their boat too! He bled the air from all possible and impossible places on the engine, and diagnosed the problem being an air leak in the fuel piping. He showed me the tricks, and I learned a lot - always these emergency crush-courses that do the most good when it comes to engines. He helped to jury-rig the piping. The engine wouldn't start (start battery too low) so he went back onto the boat to recharge the portable extra battery. But I thought I’d try again, and this time, it worked! The other boat couldn't help seeing the joy and glee on Space, and waved happily to us. That evening, they invited me and the crew on board for dinner and rum punch, and it was very nice getting to know the four of them. In fact, they had even tougher "adventures" on their first voyage on board their 36 ft - not only did the engine stop, but everything else went bad, and they eventually had to be towed. "See, that kind of thing happens to professional mechanics too!" I thought, and everything suddenly felt a lot better.

I took a bit of time to explore Saba more, while waiting for a more favorable wind, and finally took off to Sint Maarten. It was a very smooth and fast sailing under blue skies, at around 7,5 knots, maxing about 9. Cleared in at the immigration with no further trouble, and got back across Smpsons Bay to Turtle Pier Marina, familiar to me since my last stay here.