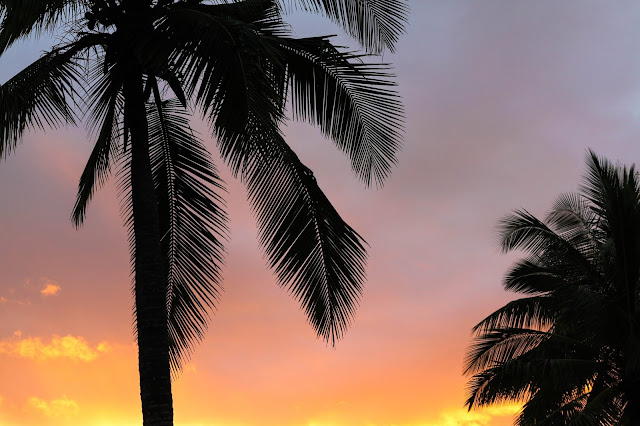 Palmerston Atoll would be a very exotic experience indeed. There is no harbor and no airport, the inhabitants want to keep it this way. The only way to come here is by a sailing boat, or by getting to any of the islands that have an airport and then pay for a ride with a motor boat that acts as a local taxi. This ride will be long, and may not happen at all should the weather be the least unstable.

The island is covered with coconut palms and ancient Mahogany trees. The fillets of parrotfish are the island's only export, and the major part of their diet. There were abut 50 people living there at the time of my visit, and almost all are descendants from William Marsters, who annexed the island from the British government, and together with his three wives populated it with 23 children. William divided the island into "families", and set strict rules about intermarriage. Palmerston is the only one of the Cook islands where English is the native language. The inhabitants still speak Gloucestershire dialect.


The supply boat only comes to Palmerston about three times a year, sometimes only two.  The inhabitants are directly dependent on the supplies, and any lack of it affects the daily life greatly. This year, the islanders are low on diesel, and have to cut down on the electricity use. So the generator is only turned on in the morning and in the evening. They stash up with goods for 6 months or more, so they won't run out if a boat does not come. They eat canned food, rice, “cabin bread”, and also a lot of fish and chicken (the chickens are locally grown along with some pigs).

There are often cyclones in this area. People of Palmerston have a time-honored tradition to survive these: they lash themselves to the trees in order not to be blown or washed away.

As I was approaching the island, the wind increased to gale forces and the waves were 5 meters high, and a bit steep. I made it to Palmerston just in time, hooked up on not one but two moorings, and could finally breathe with ease, of though the wind was howling and s/y Space was the only boat there. I did not see any people lashed to the trees... however the wind was just gale force and luckily not a tropical cyclone.

The island was one of the most remote and exotic places I have ever visited. It is located on the opposite side of the Earth from Sweden, and that could be exotic enough. Also, the culture there is very different. I got a warm welcome from a family there, they treated me and the crew with local food, gave a tour of the island, and told a lot about their life there.

On the third day of the stay, I was lucky to get to participate in a traditional ceremony. The island finally got their own satellite dish, and TV – and now it was to be celebrated as they would turn it on for the first time! That’s 2010. They usually just watched DVDs, but now they can watch news, movies, and (seemingly most important) rugby. The whole island’s population, about 60 people, met up near the Telecom center, everyone brought some food and treats. The Diaconess read a prayer, and then everyone sang a traditional Maori song, women and men singing different parts in tune. Then, it was time for some food from the collective table. There was a lot of stuff that was completely new for me. And after 18:00, the diesel generator was turned on, so the TV could be watched! Everyone got to vote for the channel, and the public opinion settled for Cartoon Network (about 50% of the population is kids) so Tom and Jerry were doing their thing on the screen accompanied by giggles and cheers from the crowd.

On Saturday, I treated Simon's family with a dinner. I prepared salads, pasta, and a cake. Another boat arrived, Meikyo with a Canadian couple on board. Their autopilot broke down so they were caught in the gale without autosteering. Luckily, I had an autopilot part they needed, so they both fixed the steering and got to see Palmerston, to where they are coming back after their season in NZ.

There is very much to tell about Palmerston, a very fascinating island! I gave them a lot of different goods and materials as an appreciation gift for their hospitality. I also established a contact with the local jewelry maker, hoping to be trading across the globe, maybe even be coming back there to live for a while some time! However, the jewelry maker was not too keen on export and any large production. Why stress to make heaps on money? And then spend them on what? It’s much better to live a balanced life, working just enough, having time for recreation, family, creativity, and rest. They already live in paradise. No need to hussle. The jeweler gave me a gift instead, mother of black pearl jewelry that was absolutely amazing.

I stayed for several days altogether. I swam around hunting for parrot fish with a spear gun, and watched the whales. That was also quite a show.

The humpback whales come to the islands to calf and take care of the newborn whales. They were breaching, jumping, fluking, and playing in the waters around the boat for several days! There are documentaries where the camera team would be out at sea for days and weeks, just trying to spot a whale breaching the surface and jumping. But here I had it all the time, and could sit around in the cockpit and drink tea with Meikyo and just watch the show around us. The first time the whales came, at night, they were so close that their breath sounded like a huge monster under the boat, in the total darkness, quite scary. But later, I became more relaxed. I even got into the water to swim with them, however I decided not to come too close. The creatures are as large as a train locomotive, and not very sharp-eyed. The whales were singing, and it as easiest to hear that from down below in the boat. I was also very lucky to hear a baby whale sing, maybe for the first time in the little creature's life. This tiny voice trying to mimic the adult whales was precious.

I left the island with the brightest memories and a warm heart.

The next target was the island of Niue - read about the sailing and the destination in the next post!