Fiji – the hassle, the beauty, and the tourism

I arrived to Suva on a Sunday, 5th of November, so I had to stay on anchor outside of Royal Suva Yacht Club to wait to be cleared in. On Monday, five officials arrived by water taxi (that I had to pay for) and did the greatest amount of paperwork I have ever encountered on my trip from Sweden to here. I had to account for everything from the mast's color and alloy materials to the life raft's specific model name and number. The medical inspection report was also very interesting - the inspector was competent enough to establish that there were no diseases or contamination risks, without even entering the boat. For all it's worth, I could have had a boat full with two dozens plague-infected monkeys from Central America, nobody would have noticed a thing. All the paperwork cost a fortune though.

To clear out is even more fun. The officials will not come to the boat; you have to go to the King's Warf, a glamorous name but in fact the exact opposite - big industrial harbor with thousands of dirty containers, huge lifts, cranes and tools, and a maze of workshop buildings. Somewhere there, the customs office is hiding out in a little shack, and they would send you running up and down the stairs. The walls are tapered with posters of recent drug razzias and findings by the New Zealand and Australian customs at the airport and the post office. They really must have a lot to deal with, with all these photos of pills smuggled inside toys, baby bottles, make-up kits and electronic devices. The customs officers, with an all-important air about them, listened to Fiji music and made jokes as they worked in a very relaxed pace.

I had a bit to do between the clear in and the clear out. The crew that came along from the Atlantic was signing off the boat to fly to Sweden, and Tobias, a friend who sailed with me in both Sweden (the first sail with Mare Liberum actually), and later in Caribbean, was signing on to sail to Port Denarau and further on to Vanuatu.

I had rented a car to drop off crew at the Nadi airport 180 km from Suva, as the taxis cost a great lot, and I also would pick up Tobias from the same place the same morning. I would drive Tobias to Suva, get jerry-cans with diesel, some big water bottles, pick up the huge bag of laundry, and then we would go to the anchorage by dinghy and set off to Port Denarau, as a cyclone is rumoured to be approaching Fiji.

But as all good plans, this failed. The night before crew would fly out, we were going from the marina to the boat by dinghy, but some local fisherman put a fishing net all over the marina's entrance so the outboard propeller got entangled in the net, so the outboard could not be used.

We rowed back, which took almost an hour. It was by now very late in the evening. To minimize the risk of being late, we had to row back with the luggage and start driving right away. That was against the wind and the current and the waves, in the dark of the night, with different opinions on what the shortest way to the marina was, and it took probably the double of the first trip, leaving both wet, exhausted, and very frustrated.

The road to the airport was in a bad condition, so the 180 km trip took about 4 hours, at night, tired, with stray animals running wild, road kills all over the road, sharp turns, a road with holes and multiple reparations – all this made the trip very shaky and slow. I was afraid the car would fall apart. Oh, and did I mention that they drive on the wrong side of the road here? I had never driven a car on the left side, and it took a long time to get used to, especially the automatic clutch that had to be operated by the left hand, and the blinkers on the right.

By the time we got to the airport, the sun was up. I slept on the parking space for two hours (I hadn’t had any sleep and needed at least some rest before driving back). The crew boarded the plane, and would land in Seoul a few hours later getting picked up to a hotel and a warm bath. Me, I welcomed Tobias to Fiji and drove him to Suva, which took five hours or so. After the sign-in at the customs, we barely had time to come back to the Royal Suva Yacht Club, in order to fix a boat ride home, which they were nice enough to provide for almost no cost (with normal boat taxis, it costs like a taxi ride between Stockholm and Sollentuna).

All in all, a crazy lot of hassle, which was slowly starting to subside towards the end. I found a guy who would try to fix the outboard. Also, I got some high speed internet for the first time for ages! The internet in the marina costs a fortune and the access is sold per hour, which is about enough time to send one email and read another two, no kidding. Finally, I've cleared us out for a trip to Port Denarau, located on the West side of the island. It turned out that the cyclone was not going to hit Fiji, at least not this week, so we decided to stay in Denarau until Monday or Tuesday and head for Vanuatu from there.

Fiji is a very interesting place otherwise, a frantic mix of South Pacific, India and China. Half of the locals have Indian roots. The curries here are almost as great as in India, and there is at least one Bollywood film in every movie theater! The island is mountainous and covered with lush jungle, and there are a lot of friendly birds hopping around and "talking" non-stop.

We went off to Port Denarau, a trip that took about a day. The last night before it was spent in the local pub, trying to compete with the locals about who buys whom beer pitchers, so in the morning I was very tired. Tobias got seasick on the first day, however it usually stops directly and he's all right the rest of the trip. Myself, I helped him feed the fishes, but I think it was 99% hangover and the rest was pure sympathy. I have never been seasick on any boat. On the first one, the 27 ft Vega, it was sometimes close to it in the beginning, but Space has been very comfortable (of though it has a rounded bottom and fin keel!) so I never had any trouble. But there is a first time for everything, I guess.

Upon arriving to port Denarau, near the Nadi airport, we promptly realized how different it is from the rest of the island. Here, tourism flourishes and big luxury hotels with bungalows are everywhere, as well as tourist shops and restaurants. Hard Rock cafe was just opposite our mooring! The shops are large and the choice of produce is immense. I must have looked like the tiny village girl coming to the big city, as I stared in awe at the things in the bakery and the supermarket. One gets used to the solitary little Pacific islands and forgets quickly how it is in the rest of the world.

Tobias had brought a gift to the boat - the same fine Amarone wine we drank when he sailed along on the Vega in Gothenburg (yes, when we ran out of gas in the middle of Gota Alv, and got very much attention from the Coast Guard). So we spent the evening on the boat, having heaps of nice food from the supermarket, and drinking fine wine (you can't imagine how sick I am of the cheap Clos wine that I stashed up in Panama, it tastes like strawberry marmalade that has gone bad. Also, it had run out by that time which was also a bit terrible)

The day after, we decided to explore Fiji while we could, and do as many touristic things as possible. We checked all activities and tours but almost none could be done on a Sunday. So we found a taxi driver who could get us to the places we wanted to go, and in the end it cost us much less and was more enjoyable.

The Vitu Levu island is quite mountainous, with a lot of islets and reefs outside. But Fiji is not only the two islands you usually see on a small scale map, it consists of over 300 big and small islands, and maybe a third of them are inhabited. We started the trip at the bottom of The Sleeping Giant, a huge mountain that looks like a fat man who is sleeping on his back. Then we went to the hot springs and mud pools, and got as dirty as clay statues, then swam around in the hot natural pool (the water coming out from the hot springs is about 70+C and gets mixed with a colder stream). Then we received a treatment of coconut oil massage from Fiji women, in a small traditional hut. Such a luxury for a dirty and tired sailor! I have not had a hot bath since the Shelter Bay Marina in Panama - they had a cold and a hot pool free to use for the marina guests.

The next stop was a small Fijian village, where we got to participate in a Kava ceremony. In Tonga, there was no real ceremony, you just drank the kava, that’s it. In Fiji, things are more complicated, and there is a ritual for drinking. Everyone sits on the floor, and the drink is prepared in front of you. Then, the coconut shell cups are passed around, and you have to clap your hands in a special way. The chief drinks first. The chief was not there, so the villagers elected Tobias to be the chief. I was second to drink. Then everyone had to drink in turns, three cups each in total, even the taxi driver. They told us about their village traditions, and asked me a lot about my trip through the world's seas.

Next stop was The Landing Point, where first people came to Fiji in 1500BC. After that, we went to a beach and did some horse riding. And now, we have found a place that has traditional Fiji dance, with fire show and knives.

A cyclone was just approaching the islands and would last for two days. The marina is very protected so we would wait for the storm to pass, and then go to Vanuatu.

Those bright days there with a friend really made some great memories and smiles. I was so happy that I got a visit, and got some help to sail further. Could not thank Tobias enough.

Also, what I did not know, was that I would come back to Fiji and sail a different route from there – this time more Southwards, towards New Zealand. This would mark the new leg of the trip, that is planned to take me across the Tasman Sea. But back then, I planned to go to Vanuatu and then across to Australia and further. Here's more about that sailing leg, and what happened there! 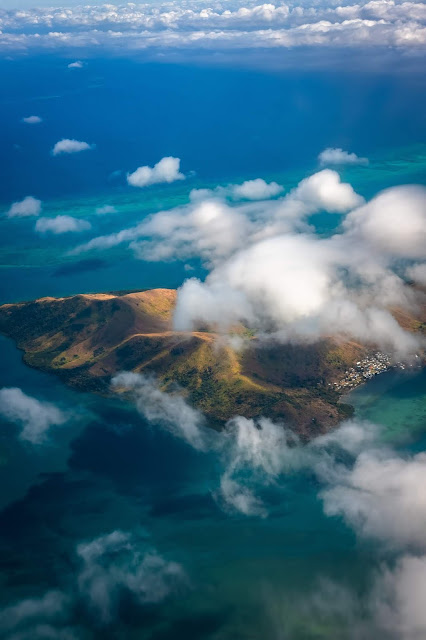