I had just got down from my first peak Galdhøpiggen (highest in Northern Europe, more about that here), and decided to spend the rest of my extremely short stay in Norwegian Jotunheimen summiting the second highest peak, Glittertind.


I knew it was ambitious. Glittertind (2465 m) is almost as high as Galdhøpiggen (2469 m) that I had summited the same morning, and my knees were already shaking of exhaustion, but I wanted to try anyway. I continued happily forth towards the peak, it's a walk of a couple of hours, and I was hoping to complete the summit before taking the rest for the night. What I did not know was that approach would take time, and the climb is steeper and more difficult. 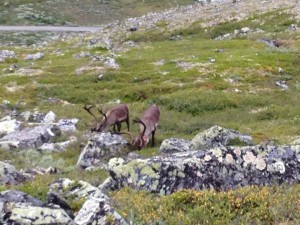 Raindeer were keeping me company while walking. The nature in Jotunheimen is of subdued beauty. The rain had stopped, but it was still wet and muddy. The trail led me across several ice-cold brooks that were difficult to cross because of how wide they were. I had no experience of this (try to look for stones to step on, or remove shoes and pants, and just cross?), but somehow I had managed to get myself over.


I had cached my large backpack at the foot of the mountain, and went on with just water and a couple of energy bars to minimize the weight. This time, there was much more scrambling, and scarily steep at places. I remember noting that a single wrong step could send you flying down, so this should definitely not be negotiated in the dark.


After the steep parts, the stone fields started. The boulders were quite small in size, like pumpkins of different sizes, meaning that one has to be treading extremely carefully, which wears the legs out. Here, the big risk is getting too tired and not paying attention - thus spraining your ankle. 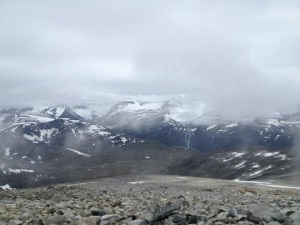 I got far. But a few hundred height meters from the top, I got cramps in both legs. No wonder - I had been physically unprepared, and tried to attempt a second summit the same day, without resting in between! So I did some thinking. I would still make it to the top if I were to rest for a half an hour, drink some water, and have a snack. But then I would not make it back before dark. I brought no torch since I had not counted on long resting stops, and the descent was going to be steep with some scrambling parts that were dangerous after dark. I could definitely not stay the night on the rocks, too cold without sleeping gear (temperatures just above zero C)


So I rested for a while, and turned. It was a very hard (and bitter) decision for someone who's used to fighting until the end. But it's also important to see the fine line between stubborness and foolishness, and stay on the right side of it. Especially if you are a beginner! Anyway, nowadays I never start any trail without a torch in my pocket... Also, now I manage and plan time more properly, and listen better to signals of fatigue. It comes with the experience.


The minute I reached the foot of the mountain, night darkness fell thick and opaque. A heavy rain started at the same time, it hit the valley like a wall of water. No place to perch the tent, the ground was sobbing with humidity. Also, I had to find sticks for holding up the tent - but there are no trees so high up in the mountains! Usually, one uses the walking sticks, but n00b as I was, I had none. Finally I managed to set the tent up between a huge stone and the wet dirt. The tent hung low, arching downwards, and the rain started dropping onto my face as I crept in and finally lay in the sleeping bag. "Why am I doing this? Never again", I thought to myself. Of course.


I had just a couple of hours of uncomfortable sleep in the cold, wet, and uncomfortable bedding. Some animal scared me by trying to get into the tent during the night, twice. It was not a human, that I know for sure - there were no humans for kilometers, and no-one knew that I was there. A Mountain Troll? I was not going to get out of the tent to see what that was, thus serving the dinner unwrapped, so I shouted and shone the flashlight towards whatever was clawing at the tent walls, until it went away.


I walked back as soon as the sun went up, and made it to the morning bus. Other trekkers walking towards Glittertind were asking me if I made it to the summit, and I answered with a bitter "no". They told me that it's OK, the mountain will stay there and I will just have to get back some day. "Why would I want to do that", I thought. This sport sucks, it's both extremely tiresome and non-rewarding. You get exhausted and wet, that's all you get. Little did I know, that I would definitely be back one day and stand at the summit. Solo again. But this time, in the winter. I would never have imagined that while walking back to Spiterstulen that August morning. 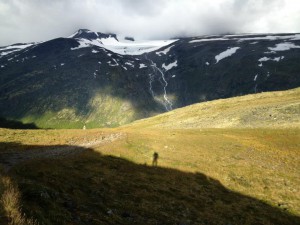