Kebnekaise is a bit of a "rite of passage" for the Swedes, since it's the highest mountain in Sweden, and is located past the Arctic Circle. It is considered a major challenge and of course I wanted to go there, before I levelled up and moved on to much higher peaks.

I was going to do Kebnekaise in August 2012, as my first summit, but there was a snowstorm there so I went to Norway and climed Galdhøpiggen. Keb is lower, but harder: in the Arctic the season is shorter, the weather more unstable, and also the approach is longer, a half-day walk from the nearest road. I was going to take Västra Leden - The West track. The Eastern one is easier, but involves glacier traverse, and since I was going alone it was not suitable.

I decided to go in beginning of June, as there was a red day and I could be off work a few days. Little did I know, that the season had not started yet. Both Nikkaluokta (the closest camping) and Fjällstationen (cabin at the mountain foot, with restaurant and hotel where most people drop their things and make basecamp) were closed and abandoned. This meant: no bus to Nikkaluokta from the airport (had to share taxi with two other guys), no possibility to leave cache or fill up water at Nikkaluokta, no food or civilisation at all. Fine by me ;) Walking from Nikkaluokta to Fjällstationen, takes a few hours or 1/2 day

I arrived to Fjällstationen in the evening. Some staff were coincidentally in place, to tell me just to forget summitting. It was too early and the snow had not melted - there was too much of it from 1400 m and up. Already on the way there I met some people who had given up and were coming back. Some teary-eyed, some just tired and pissed off. They told me that they tried to summit, but had to give up short after the snow cover started. They just sank down to their armpits in the snow, and could't walk.

I politely thanked the staff for the information, bought a map for 10 euro, and went on - despite the comment "when you're done bathing around in snow, please come back". But I needed to know how far I would get! 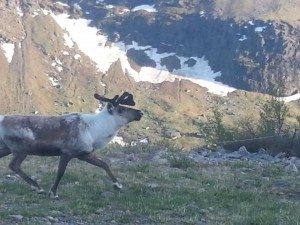 This was my first Arctic peak. Reindeer, Midnight Sun, and chilly air made me company. Also it was too early for mosquitoes, which I was very happy for.

I decided to bring my backpack along and make camp as close to the snow as possible, so I could come back and warm myself directly after being exhausted and wet. Bear in mind, I was still a beginner! So my backpack was full of suboptimal gear and weighted somewhat around 30 kg. Also, I was mostly eating raw food, so there was some extra weight because of that too. 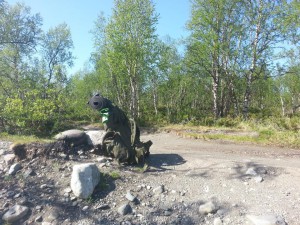 My backpack in the dust of the appoach road.

Trekking up with the full 100 liter backpack was very tiring. Most Swedes do the summit with just a small day pack, because they choose to live in the hotel at Fjällstationen, or make camp down there and leavse everything cached. They still consider it to be quite challenging, so imagine doing this while bringing everything along. Also, the voices of the people telling me that the summit is impossible were ringing in my head. It does not add to the motivation, the only thing you want to do is just turn back. I also knew that the two guys I shared the taxi with decided to give up, stayed below, and did not continue. But I pushed on - wanted to know how far I could get.

I stayed the night in a natural valley, just before the big wall of snow that started right next to it (see the picture and the steep wall? Then imagine it fully covered with deep snow). I raised camp and slept snugly in the midnight sun that I experienced for the first time in my life. It was chilly but very cosy. My little camp in the midnight sun

In the early morning, I saw a group of people lying on the ground, exhausted. These were a Czech group that had come to this point but were not going to continue. They were already tired, and - just look at the mountain! It looked too snowy, and too steep, and quite impossible.

I wished them a nice trip home, while putting on my shoes. I was still going to try this.

The Czechs said I was crazy. But frankly, I'd say it's the opposite. "Crazy" is what they did - coming all the way there, and turning back just because it looks difficult, without even trying a single step!

I entered the deep snow area. I took small careful steps, resting my weight on trekking sticks (see?! I had leveled up since my first summits, and listened to the advice of bringing the sticks! Today, I would not attempt summit without). Every step had to be taken twice or several times - to compress the snow below me to carry my weight, and then to carefully shift the weight while adjusting for the steepness. I used my previous experience of walking in deep snow on steep surfaces, growing up in a very snowy part of the world. I also took into account the fact that the snow was softer and mushier than usual, and took advantage of it, instead of only seeing it as a risk. Yeah, I fell through a few times and bathed waist-deep in snow, but I carefully and stubbornly stood up every time. Also here the sticks really helped. Slowly and surely I went on. 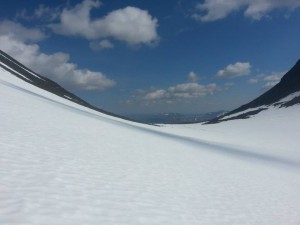 The Kaffedalen - "Coffee valley". Surely no coffee growing there

The tricky part was traversing the river in Kaffedalen. I heard the violent noise it was making under the snow, but had no idea where it was safe to cross. I made a risk analysis, made sure I could lose my daypack quickly and that the cell phone had coverage and was still in my pocket (it is waterproof). The extra change of clothes was packed in a waterproofed bag. I then intuitively chose the route that seemed the safest, where the snow bridge was thickest and the shadows from the nearby mountains seemed to linger the longest. Luckily, it went fine. The bridge held very well. Here is the only time I had wished I had travel companions - using a rope would minimize the risks.

I had absolutely great weather during the summit, it felt like a summer day on the beach. The first documented summit of Kebnekaise was done by a Frenchman, who went only in his long johns, since he only brought one pair of pants and he wanted to save them for coming down to the village and making a nice impression. I also just had long johns during a long time, to honour the first summiter - but mostly because of the heat. 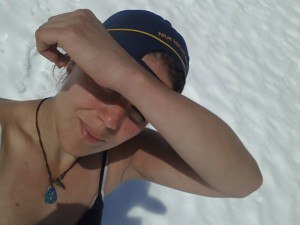 Sun shining hard. Is this a white sand beach, or deep snow at Kaffedalen?

My footsteps were the first up there for the season. Surely, people summit Keb on skis during winter. At that time, it was unthinkable to me, something superhuman. How things can change. In June, the skiing season is over, but the summer season had not just yet started. So I was extremely happy and proud that I chose to fight on, and did not just turn around and go home like everyone else. 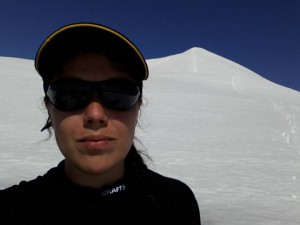 Happy camper with the peak at the background. See the foot traces? Mine, and first for the season.

As I descended, the great weather disappeared, and a thunderstorm approached right behind me. Good mixture of luck and good preparation (follow weather reports! My best tip is yr.no)

Sum-up: The trip was a bit tough for a beginner who goes solo, but not too bad. The worst thing was carrying a huge backpack up a steep trail for ages, and having to motivate myself to do that despite all the people telling me that what I'm doing is impossible.

"People who tell you that something is impossible should not be preventing you from doing it."