on July 09, 2013
As it turned out that the trip to Belukha (RU) was cancelled due to geopolitical decisions, I promptly decided to attempt Mont Blanc instead. Luckily, the Aeroflot tickets were refundable.

The plan was to take the route through Aiguille de Grises / Gonella Hut, Italian side. This involves walking (!) all the way up from Courmayeur. A lot of people choose the Freench routes, that are easier. Some even take the lift almost all the way up. I wanted to do it "properly", without lifts or aids. Also, without using the cabins - everything should be brought from the bottom, from food to tents and sleeping bags.

I teamed up with two people and set off. One was Joel, who has taught me ice climbing and alpinism, a great person whom I admire and trust. I did not know the other guy well, and he was a beginner considering alpinism, but with Joel in the group that would not be an issue.

We met up at Les Arolles Camping, Chamonix on the 8th of July 2013. This was the place for the beginning of the expedition.


We promptly made new friends there. Also, it turned out that I knew one of the groups who were there! They were doing some climbing in the vicinity.

After some last-minute provisioning, we went off to the bus station and took the bus to our starting point. The road went straight through Mont Blanc - under it. A peculiar feeling to be under a 4809 meter tall mountain, the highest one located in a European country.

We went off at the nearest stop and continued up the paved road. It was possible to grab a taxi or a bus, but the idea was to walk the whole of the approach.

We passed Lac de Miage, enjoying the rugged beauty of the mountains ranges. From there, we walked a stoney path. I left a cache along the way, so I would not need to bring unnecessary things up to the summit. A dry and clean pair of socks and underwear was to wait for me on the way back.

The day after, we continued walking up the steep mountain paths.I brought my ice-climbing helmet as extra protection from potential stonefall. Often, there were steep stone walls on one side and an abyss on the other. 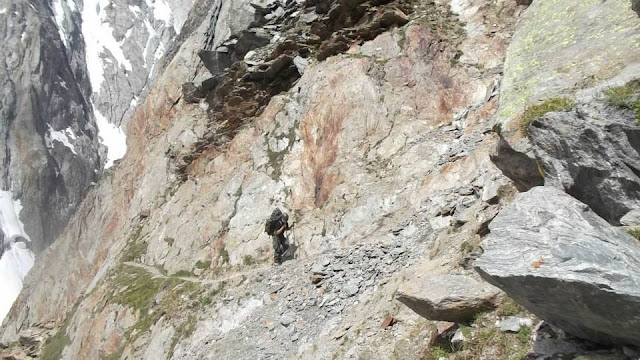 At times, it was so steep that a via ferrata was set up along the path. Ropes, chains and ladders in order to make climbing easier for all alpinists. There was a lot of scrambling, the backpack made it slightly more challenging by shifting the gravity center by over 30 external kg.

We continued pushing on. The goal was to reach the Gonella Hut and camp just outside (not using the facilities). The via ferrata gave way to more snow patches, where I had to use the cramp-ons. 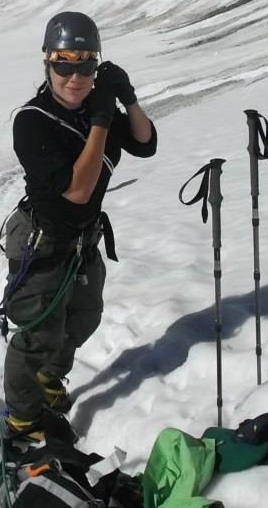 The story continues: read about Day 3 here, and Day 4-5 here.