on March 28, 2015
When I first heard of winter summits on skis, I was an amateur when it came to all kinds of adventures, and just could not believe it. Skiing is done downhill, not uphill! Both long-distance skiing and climbing peaks is challenging, so why would anyone want to combine it? And considering how cold it gets up in the mountains even in summer, it would be a hellishly miserable endeavor, it seemed. Really something for action heroes, not regular people.

But... "suddenly" a day came, when I started to seriously consider it. I had challenged myself to higher and higher summits, and had been training skiing uphill in all slalom ski resorts I had the possibility to visit. With enough XP, I realised that conquering my old friend Glittertind would no longer be a challenge in the summer. So I prepared for my first winter summit. 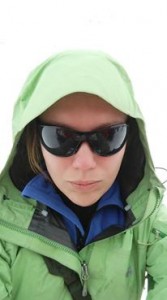 Winter adventurer ready for action. Doing it alone, this time too.

I took the train from Oslo to Otta, then bus to Vågamo and Randsverk (where the bus actually turns), and arranged for a car (through DNT cabin) to drop me off at Veolie. There is a DNT cabin at the foot of Glittertind, called Glitterheim, where it's possible to sleep warm and dry, and get a bit of food. They also help with advice and some logistics if needed. I decided not to wintercamp, to maximize success of the expedition, but instead use the common sleeping area in the DNT cabin.

I was thinking of taking the distance from Veolie to DNT cabin on skis (0,5-1 day estimated), but decided against it. I could not tell how much energy loss and/or wear it would mean, and once again wanted to minimize all risks. What good is it to be at the foot of the mountain, but not being able to go further? Today, I know I would have made it in time and still would be able to summit, and next time I would want to do the approach on skis too, but for a first time, one needs to play it easy. So I took the bandwagon transport to the cabin. Great stuff. 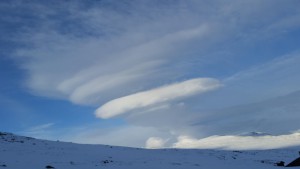 Clouds at approach to Glittertind. Promising strong winds the day after.

At the cabin, I ate, did a gear check, and prepared for rest before early rise and summit attempt. Tried to charge phone and laptop, power supply limited so I had to compromise. During gear check I realised that I did not bring an extra fleece/woolen layer, and could not count on being warm enough. I had no time in reserve, no possibility to go back, so everything had to be ready this evening. Luckily, the DNT cabins have small stashes of stuff that is possible to puchase, so I bought a DNT fleece shirt. 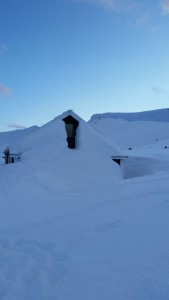 The DNT cabin "Glitterheim", that I stayed in

I talked to the other people staying in the cabin, as travellers brought together usually do - "where do you come from", "what are you going", and never "why" - such people share the wanderlust and adventure spirit. But there is a vast difference between the experience, preparation and motivation levels. Here is an example: there was a gentleman who was really trying to make a point to me about that it's not a good idea to summit tomorrow. He said that there was too much snow that came during the past days, and that I should wait one or two days since there was (wait for it) - no ski track there. But (1): I had no extra days, (2) I did not know the level of competency of this person, thus rendering unsolicited advice useless as always, and (3): if there are no ski tracks then I'm not sitting around waiting for them to magically appear, but will create them myself. Just watch me. 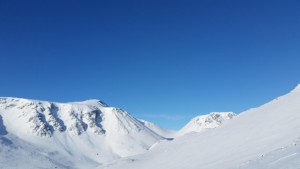 The way to Glittertind. No tracks. Only snow, ice, and myself.

The wind was to pick up severely during the afternoon, so I set off extremely early in the morning, long before breakfast and recommended start time. The short and broad skis are slow and energy-consuming in knee-deep powder snow. I also lost a bit of time adjusting and re-adjusting gear along the way. I was leading the way almost to the very top, where I was passed by a group of French randonnee-skiers that had had an easier time, as they were following ready-made tracks almost all the way, and now had speed and energy to do some plowing for me. Fine.

I saw the summit, clouds flying rapidly by. It really was blowing hard on the top. I always forget how strong the winds are on the peaks, as the summits are naturally unprotected - especially if we are talking about the highest peaks in Northern Europe! There is just nothing else to shield them from the wind. The wind chill lowers the temperatures dramatically, so it gets extremely cold up there. 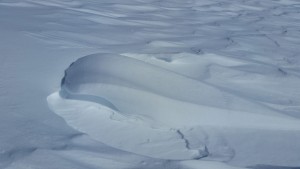 I saw the French get back down from the summit and stand still, shaking their hands and rotating their arms. As I reached them, I asked what they were doing. It turned out that their hands and arms were frozen cold, they were warming up in order to be able to continue.

The wind was now gaining strength, and white clouds were about to swallow the summit, permanently. Bad news. It's important to stay a few meters off the edge of the ridge, because of snow shelves that build up and hang over the abyss. The free fall is impressive there. But how to see the edge, if you doesn't see the end of your outstretched arm? The recommendation during a storm or white-out is to stay still, and wait for cloud dissolution - or for resque. Not an alternative when it's it's blowing hard, and is long below freezing point. 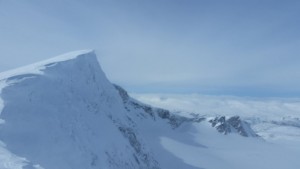 But the clouds weren't just there yet, so I made a desperate leap for it! And I made it.

I got to the summit, took off a glove to take a selfie, and realized what caused the French their trouble. Without gloves, hands froze to the bone. I lost all mobility in fingers and could not even adjust the bindings in my skis to go downhill. I struggled and struggled. It was getting dangerous. I was rapidly chilling down. I could not reach for extra clothes layers, as the hard wind was ripping off both ski poes and backpack - if I were to open it, its innards would just fly off. The snow was hitting my face, it really hurts in those velocities. I needed to get moving, get down from there, and take care of the bindings where there would be more wind protection, and to get my hands functional again. 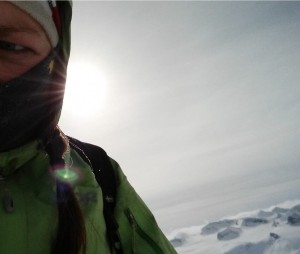 Red-faced selfie up on the summit in the cold wind

I removed my skis altogether and walked down. The snow was packed to almost-ice up there, so it would not have been a nice ride anyway. As I reached lower down, I was able to secure the bindings. By this time, I was finished, the cold takes its toll. There was another group just behind me (Norwegians), but they had to turn because of the hard wind, and the cloud cover. I felt sorry for them, I know how hard a decision it is to turn back when you don't have extra margin which means giving up completely and going home. Still very happy I took the risk and went on - would be really bitter to just miss Glittertind twice. 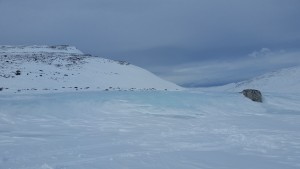 Blue ice in the valley on the way down.

Getting down to the cabin, into a warm and dry bunk, and having a warm and tasty meal (or any meal at all), all just after a demanding expedition day - that could easily be the sole reason to do this. It feels just perversely good.

There was no mobile phone connection, but I found a coin-operated phone, and checked-off with civilisation. The wind was getting wild even in the valley now. I read a book from the local library, drank a lot of hot chocolate, went to bed early, slept well and did myself a favour of getting the snow-mobile instead of skiing back during the whole day and risking missing the bus. 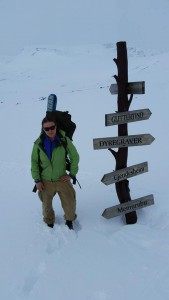 Happy and tired after a winter summit