Biking between the oceans: Part three

on December 30, 2015
As I reached the Arenal area, I had seen that the time frame would work and that the plan to bike between Pacific and Caibbean was tough but doable. I had crossed rivers with the bike (so deep that the saddlebags were flooded and wet all the way through. I had camped in the cloud forest. I had eaten the local food, I had gathered water to clean by the filter I purchased, I had seen animals and birds I would never dream of seeing, I had seen heartbreakingly beautiful views, and had had a very nice mental endurance exercise. 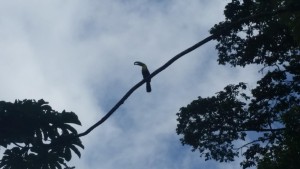 A toucan sitting on a branch overviewing the backroad.

I pushed on. But as the first 4 days were like biking through a giant hot hairdrier, the time had come to enter another stage. Rainforest means rain. It was like biking through a giant car wash. Disgusting muddy water everywhere, whipping my face, my clothes, the luggage. Everything was wet. Rain was pouring as I set up my tent, rain was still pissing down as I packed. Everything was wet and started to rot just a few hours afterwards. 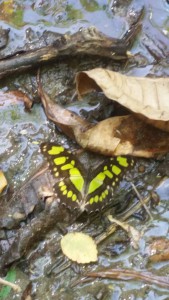 Adventure does not stop because it rains. Beauty does not disappear. But when gear rots, things can get nasty

So I push my way through the country. It's still often "uphill de puta madre". I do a lot of motivation management. I stop at hotels sometimes and try to dry my stuff over the night, but the humidity levels are too high. A very unglamorous endeavour, and I am happy I do not have travel companions that would have to endure the same amouts of punishment, or the mature smell that follows when all your stuff, including shoes, socks, and underwear have been wet for several days, but still are actively sweatily used. Washing can be done, but nothing will ever get dry. 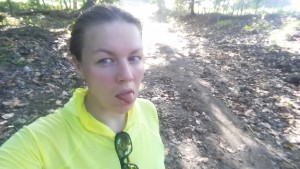 I stop at a frog garden and marvel at the nature. Happy to have avoided the poisonous tree frogs during the trip. And the snakes. And the large cats... But these creatures are not stupid, and also try to avoid humans. 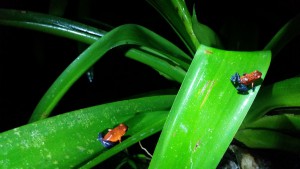 At the end of Day 7, I had made about 330 km, having passed La Fortuna, Aguas Zarcas, Puerto Viejo de Sarapiqui, Guapiles, and Guacimo.