on December 22, 2015
I have previously sailed between Atlantic / Caribbean and Pacific Ocean, through the Panama Canal. This time, I would connect the two coasts by mountain bike. Solo.
Note that I had never mountain-biked previously, neither had I made any long trips by any kind of bike. But how hard could it be? I was eager to find out.

I decided to do it in Central America. Costa Rica caught my attention as a unique country, with a high happiness rate per capita, a marvellous nature, a better political system and social structures than most countries in the area (they had a female president recently), a high awareness about ecology, and a nice climate. I just had to check it out. 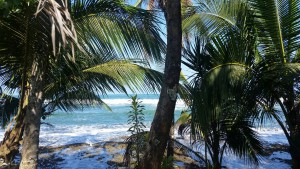 Landing in Liberia, near the Pacific Coast, I rented a bike at Guanabikers and got a ride to the beach - chose Paya Hermosa for being less touristy. The bike rental company could not arrange for saddle bags with such short notice (I made the booking from a transfer airport, all this was done on an impluse), so I rebuilt my backpack into two bags to hang low and hold heavy stuff, and the holding sack for lighter stuff to place behind the seat. Cycling with a backpack is never a good idea, as it gives a higher center of gravity, and also stresses the crotch unnecesarilly ;)

I spent one day on the beach, reloading before what was to be a tough trip. I know that many companies arrange for such adventures, in a group, with a guide, and a car that follows them with all the luggage. But I am not paying several hundred Euro for someone to tell me how fast to pedal or where to stay. :D So I went without a group, alone, on a route that I had loosely planned based on Lonely Planet. 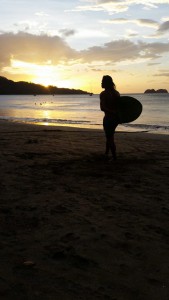 
I woke up, ate breakfast and left. From the coast, the road goes stubbornly upwards. The bone-dry Gunanacaste dust blew into my face, the wind strength got me to tip over a couple of times. It was like trying to mountainbike into a giant hairdrier. The stuff I brought was heavy, as I wanted to be completely self-sufficient, so the going was not fast. Luckily, the road was paved and smooth.

Hermosa - Liberia took one day, and I stayed in a hotel there, leaving a cache to pick up before my flight back. I would not bring my laptop, unnecessary clothes, books etc. I enjoyed local food (fish with blackberry sauce or passion fruit? Great stuff!) and slept early.

The day after was easy going on the Interamericana. Normally, it's quite dangerous to go there, because of the heavy traffic on the 4-lane road, but the whole strip from there to at least Cañas was being renovated, so 2 lanes were empty, reserved just for me! I stopped a few times for fresh coconuts being sold by the road in the middle of nowhere. The weather was still extremely hot accorind to Scandinavian standards (+30-35 C), so rehydration was essential. I stopped at the Llenas de Cortez waterfalls near Bagaces. Taking the heavy-loaded bike down to the waterfalls and up was a pain, and I was filmed by a local guy who apparently suspected I was insane. But leaving it at the parking lot unattended was not an option. 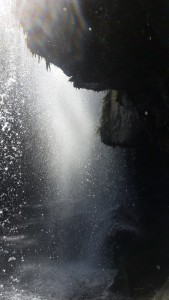