on December 24, 2015
Having cycled for two days, I was a bit sore, but was still determined. At Cañas, I turned off from Interamericana and took off a country road towards NE. The destination was the Arenal Volcano, where I would do a sanity check of the time plan, effort needed to reach the opposite coast, personal form check etc in order to continue - a kind of a point of no return. 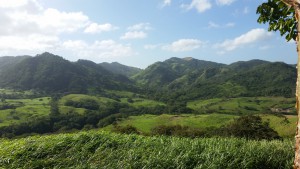 
I was going towards Tilaran and Tronadora, to round the Arenal lake from the South. However, that plan was cancelled as I missed a turn, headed sharply downhill for a few km, and suddenly was in the deep back country. I did not turn back, and continued along the path least thread, with no civilisation ahead and no information about what may be hidden there in the mountains. Was it because of lazyness or adventure spirit? Frankly, both.

Sun started to set. Still no signs of civilisation. A few cowboys were tending fields. Cloud forest along the road. And completely sickening elevation changes. As the bike was heavily loaded, I often had to walk along it to make any progress. Both breaks were sometimes not enough to keep it still on the reclining path, even if I wasn't on it. That will give you the idea of how steep it was, and how much it was packed. 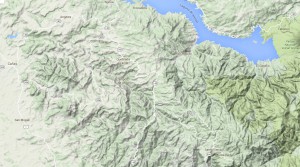 Here is the idea about how steep it can be. Thanks Google Maps for the terrain image. It is much more painful IRL.


I gave up on finding civilization, and found a good spot for my tent - where it would not be seen from the road, not be flooded with rain, not be too close to a river (snake danger), etc. I made sure that no traces would be visible to there, as I did not want any uninvited guests during the night. I kept light and sound discipline as I made myself an evening meal (dry meal pack), and went to bed early. Then, I made sure to wake up as the sun was rising - to leave the place before full day visibility and to get as many bike hours as possible before the sun was too strong. 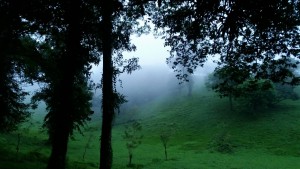 Here is the view I woke up to. A cloud forest, untouched, just outside my tent.

I continued pushing along the backroads, to finally arrive to beautiful El Castillo, tired but so many experiences richer.

By that time, I had made 140 km in 4 days. During the backroad adventure, I often just made 4-5 km/h because I had to lead the bike. It seemed the plan would work.