So, here comes - a post that describes the sailor traditions when it comes to wearing tattoos. I'm a fan of following the old school and the original meaning of the pictures, rather than not knowing what a tattoo really stands for before getting one. In some situations, such things could lead to less entertaining situations, mildly put.


So, back to the sailor stuff. Samuel O' Reilly, a famous NY tattoo artist, once said:

"A Sailor without a tattoo is like a ship without grog: not seaworthy."

The sailing tattoo traditions are divided to superstitious stuff, "practical reminders" such as maps, rules, or names/portraits of near and dear, and lastly sailing experience points and memories. A sailor could not bring a suitcase with souvenirs from the travels because of lack of space on the boat, so they carried them on their skin instead!A classical traditional example of "practical reminders" which also serve as a recognition mark between the folk of the seas: the words"hold" and "fast" tattooed on the knuckles of the two hands. This is said to help remember to hold the riggings... but really serves to see a fellow sailor among land-lubbers. Knuckle tattoos are however not the most practical; they will be hard to protect from sun. Tatoos should not be exposed to direct sunlight without a sun screen, otherwise they get smudgy, greenish, and need to be filled in again shortly.More examples of practical "nice-to-remember" stuff: port & starboard ship lights were tattooed on the left (port) and right (starboard) side of the body. Sounds like a punishment for those who wouldn't remember which one is which... making a tattoo today is not painless, and back in the days it was a lengthy and more risky process, more akin torture.Nautical stars are a symbol of luck. There are several more luck-bringers; for instance a pig and a rooster on the feet. This is said to protect the sailor from drowning and to take her quickly to shore. This comes from the dawn of sailing days, when there were no fridges and no canned food, and the only way to have sailors fed during the long voyages was to bring live stock onboard. In those ancient times, it was noticed that though many drowned after shipwrecks, some stock - specifically pigs and roosters - always made it to the shore, even when caged. I obviously cannot double-check that intel, but the tradition turned into tattooing the animals on the feet, to «carry» you to shore.

The cock and the pig on my feet. Tattooed by Henrik Gallon.
There is an old sailor rhyme: "Pig on the left - protects you from theft, cock on the right - never lose a fight". I will not mention the argument for having a cock below the knee and automatically winning some bets ;)


More animal symbols: a swallow was also used as a form of protection, a symbol of spirit being lifted above the waters. The amount of swallows (or sometimes sparows) tattooed represents the amount of nautical miles sailed, one for every 5,000 nM.


We now touch on the symbols showing the amount of sailing experience, so here are a few more. An anchor means you have crossed the Atlantic Ocean. A full-rigged ship is for Cape Horn, a turtle is for crossing the Equator, a golden dragon is for crossing the International Date Line. 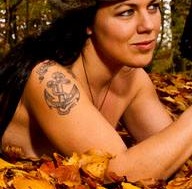 Here is my own anchor, legit after sailing the Atlantic and then some. My own design, tattooed by Henrik Gallon. Photo creds Magnus Clarén.


A usual dragon shows that you have sailed in China, a Hula girl means a visit to Honolulu or Hawaii. Palm trees are for the Mediterranian. An anchor on one arm and a star on the other mean "around the world".


A rope knot means a Four Knot Sailor - that is having crossed the Equator, International Date Line, Arctic and Antarctic circles.


When I set off sailing around the world and did this research, I thought getting a Four Knot was destiny of a few brave only - some superhumans whom I'd never even get the privilege to meet. Today, in fact, I only have Antarctic Circle left, and it is completely doable - only reason for not already having done that is being too busy with all other adventures.


I have myself designed or co-designed all my own tattoos, including anchor, rooster/pig and many others. I have also done occasional tattoo design jobs for others. Happy to help if inspiration needed.