During June 2016, I sailed from the chilly faraway islands of Faeroe to the country of Iceland. I came along Mae West, the same steel ketch that I sailed from Norway to Svalbard during 2015.

First jump-off point was Western Faroe Islands, Sørvagur. It was great to see the boat again. Two of my friends agreed to come along to this sailing, and I was very happy to see them. Daniel had previously sailed with me in Scotland years ago, when I set out to sail around the world. Sebastian had just done a little sailing, but with good determination and happy spirits it's possible to sail the high seas even if you're a beginner!

Before we were sailing off, we needed to pay a last visit. We got invited to a Faeroe family and got to enjoy a traditional dinner: first soup made from fermented lamb, and then the fermented lamb itself. Also rhubarb wine, and rhubarb dessert. Faroean fermented lamb smells of spoiled wool and tastes a bit like like lamb meat baked with strong green mold cheese.

The next destination was Mykines, which is an iconic destination on the very West part of the island group. 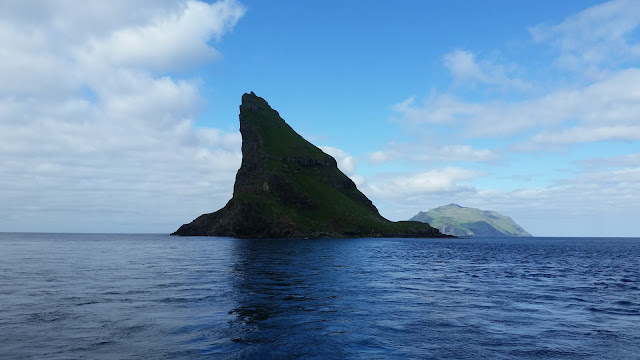 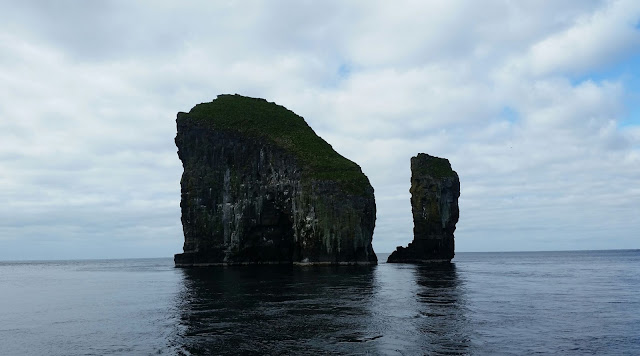 Mykines with its lighthouse is the Westernmost isle of Faeroes. The Atlantic Bridge is also the Westernmost bridge structure. About a million of puffins live here. The sheep and puffins were ever-present. The dramatic panoramic views likewise.

There was a great deal of walking, as I took the crew to the top of the nearby mountain. Then, we descended and went to the puffin areas, across the Bridge, and to the lighthouse. It was a day's walking trip, very much enjoyed. 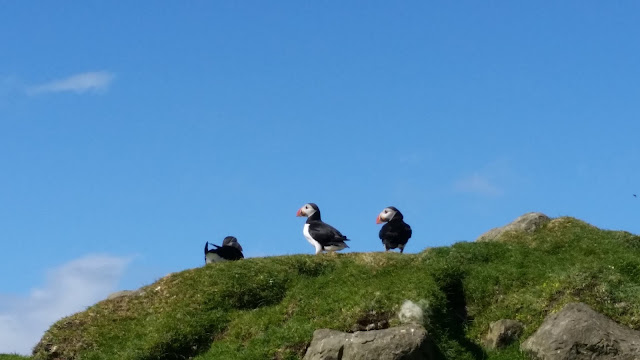 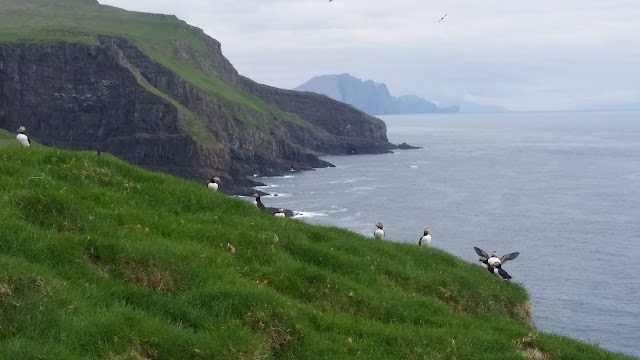 We set sail from Sørvagur to Eiđe, Northern part of Faroe islands. That was to be our jump-off point for the Iceland leg. The Faroe family came along to Eiđe.

The weather was extremely warm that summer, causing a water shortage at parts of the islands. On the way to Northern Faeroes we experienced a little bit of sun, but mostly clouds, fog, and dramatic rocks.


While in Eiđe, some mast maintenance was to be made. The crew that had not sailed with Mae West were to do some training, while I got some time off and went to climb the highest mountain in Faeroes, Slættaratindur.

When I came back, we were all ready to set sails. We were setting off to the North Atlantic, to a crossing that was going to take at least 3 days. Weather is always unstable there, as low pressures are brewing in the vicinity. There was a low pressure area coming in just after 4 days, with gale winds that were going to hit the South coast of Iceland, so we were in a hurry.

As we moved away from the Faeroes, the waves were picking up. See the next post for the Iceland arrival.