My second Elbrus summit, 2016 both Western and Eastern peak 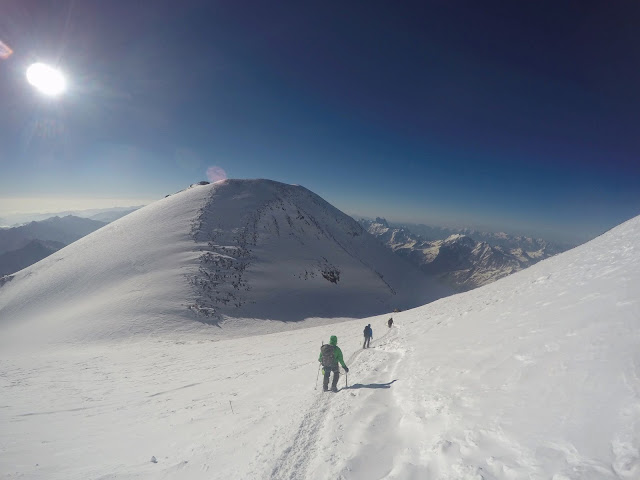 In 2016, I brought a group of four to summit Elbrus from the South again (read about the first summit here). The preparations started several months before, as I set up a training program suggestion for the team, and got them to both train strength and cardio. The trip was timed so we’d have a few days in reserve if the weather was foul, or if we’d need a bit more acclimatization. The guys were from Norway and Sweden, and had never done mountaineering before. All training was to be done on site.

We arrived to the airport and got a mini bus that I booked to Cheget valley, through all the checkpoints that are along the way. Taxi cars get to pass through directly and not stand in the queue, which is a good thing with getting a local car from Elbrus area. We arrived, got settled, took a few walks and secured the last of the equipment on site. It’s a beautiful place. The village of Cheget is absolutely lovely, and I enjoy getting back there every time.

The very next day was the acclimatization hike to Cheget, I did not take the risk with getting to higher grounds as the last time (link), we stayed at the “Small Cheget” peak and had a picknick. During this hike, I showed walking techniques and talked a bit about safety and security.

We also did an acclimatisation ride to Garabashi, past Bochki and beyond, with the new lift that was ready now. However, the weather variations including thunderstorms can close off the lifts which can make such plans cancelled. Relocating directly to about Bochki or Gara-bashi guarantees altitude symptoms. Relocating to Priyut-11, other refuge cabins at near 4,000 meters, or the camp site at the same height or above, without acclimatization, will definitely mean AMS. 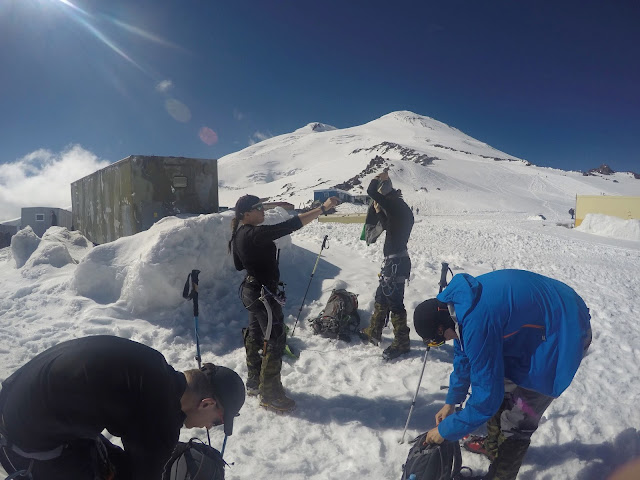 We stayed in Gara Bashi once again, acclimatized, and then relocated to about 3,8k. There, we could stay indoors. I’d normally have people bring own tents, but that was a beginner group and they lacked the equipment needed, also I did want them to be well-rested before the summit attempt.

We spent some time acclimatizing, just going up higher and higher, and staying there for at least an hour. Hanging out on “the shelf” near the broken snow tractor, listening to music and measuring our pulses was quite soft – except for when it was snowy and windy, very cold to sit still, when you are counting seconds until we could get down. The guys were handling the altitude well, despite the symptoms, and managed the effort of walking all those distances up and down despite being tired, out of breath, and experiencing all kinds of discomfort.

As we finally could have a more clear weather report, it looked like we could do the summit attempt 1 day earlier than planned. I was fairly sure all were done with the acclimatization, and were ready. At the night before, an extra guide joined us, since I wanted to have a maximum of 2 people per guide. It was a local guide, recommended by my friend in the Elbrus Search & Rescue. He had a 3-digit log of the summit.

We headed off into the night. The climb was uneventful, took a lot of effort but things were OK. The ropes were not used anymore because of something happening earlier – both me and the local guide were agreeing on taking the main path.

On the summit, we celebrated by shaking hands. Some photos, and then down. Just ending up on the summit does not mean success – you have to get down too. And most of the accidents happen on the way down. People are tired, and sometimes too relaxed. In the euphoria, it’s easy to forget the danger everywhere.

As we got down from the steep wall and could rest in the saddle, part two of the plan started. I asked the guys how they felt, something I do a lot along the way. Some were still feeling great, some were having troubles with shoes and blisters, and some were absolutely finished. So I asked: if we were to go up to the top again, who could be up to it?

Most said they did not want or could not do it, but one team member was jumping up and down at the thought of it. He knew, however, that I really meant it. Elbrus has two summits, the other one (to the West) just a few meters lower – but less summitted. And I was checking if someone was up to another summit. Quick, before the altitude kicked in.

We let the rest walk down – they were fine, just tired – and headed across the saddle, past the emergency cabin, to the next steep path. On this walk, I really started to feel the thin air. But there was only one direction: up. We reached the summit, and again the wonderful euphoria kicked in. Two in one! Among all that summit Elbrus, not many have the capacity to do this.
We hurried down. The Motorcycle Couloir was on or right, and I was daydreaming about taking my motorcycle and negotiating this… not very probable, but a crazy thought to toy around with, while feeling immortal.

We joined our friends at the camp at 3,8k and had a few hours of sleep. We were, after all, up since just past midnight. Then, we could have stayed for another night – but were longing to get down into the valley and start celebrating, so we packed and left. We made it to the cabin lift, a guard needed bribing to get us on, but finally we were below!

I booked a nice restaurant that had Russian Banya (a kind of sauna), we got absolutely stuffed on all the tasty Georgian food, and finished off by a Banya ritual where I whipped everyone up with bunches of twigs, as you do. Beer and ice cold showers in between, it was great.

I managed to rebook my tickets and get home one day earlier – and the guys stayed and got a round tour of this Caucasus area with a local guide lady I know. They visited the waterfall valley, got a dinner in a traditional Caucasus village, in her family house, and did a lot of sightseeing. Not many realize how much there is to see here, and such a local guide is priceless! It was a good wrap-up of the trip, and all were satisfied - hear the happy voices here.http://www.adrenalena.se/2017/03/gladjerop-fran-tidigare-expeditioner.html