on September 02, 2016
In August 2016, I did a several weeks long sailing trip in ice-cold Arctic Greenland. Here's a day-by-day summary. 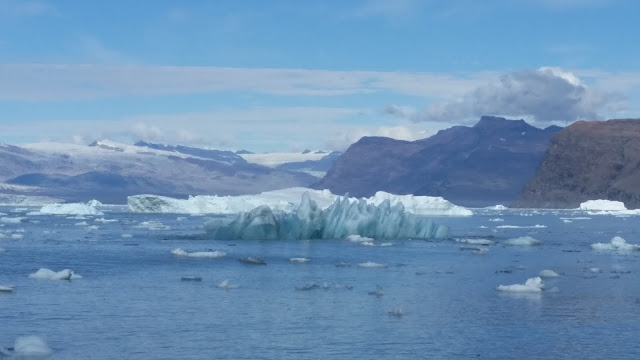 Sailing among icebergs in Greenland. View from deck.

10/8 2016: Started the sailing adventure in Nerlerit Inaat. The anchoring just outside of the Constable Airstrip was hit by a swell and therefore not so comfortable, so we set off right away. We sailed towards the little village of Ittoqqortoormiit, it had a protected anchorage and a possibility to provision. I had sailed on s/y Mae West with André before, both to Svalbard and between Faeroe Islands and Iceland - but this time, there were new crew. My friend Eva from Norway was already on board, was very happy to see her. Then there were Robert, Lia, and Hannie from Holland, new acquaintances for me.

11/8 We arrived early morning, and stayed in "Itto" for one day. I had time to buy a nice rifle and some ammo, in order to protect myself and the group from polar bears when we are out hiking or mountaineering. 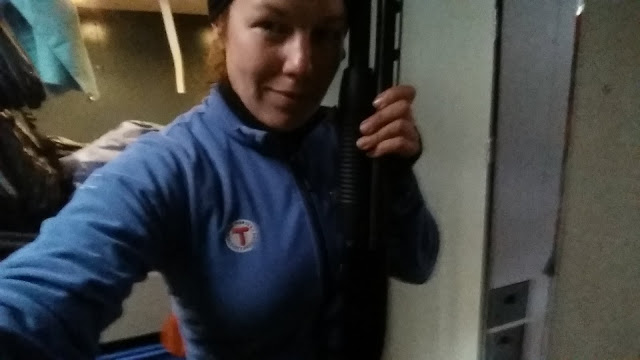 In my cabin with the brand new rifle

12/8: left Ittoqqortoormiit. The wind was on our nose, so we were tacking all day and night to leave Scoresby Sund. Huge whales were diving up and down around the boat, and continued to do that outside any major fjord we passed.

13/8: Headed into a bay towards Turner Island and spent night there on anchor. Since the coast and the sea floor are badly charted, we had to head out in a dinghy with an echo sounder to chart this bay, and re-anchor later according to the readings. 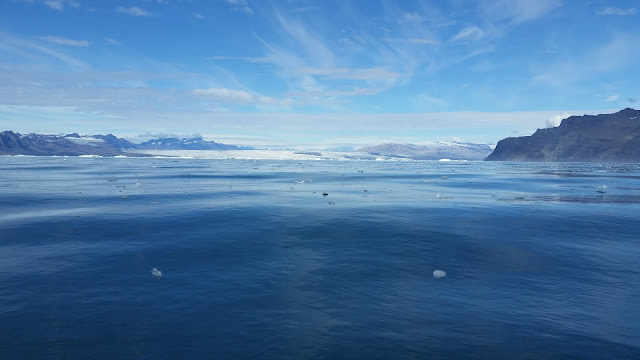 East coast of Greenland - the view from deck

14/8: Made a run for d'Aunay Bay. An Arctic storm of 50+ knots was coming, so we needed a safe place to wait it out. It's no game even in the tropics, here it's disastrous. When entering the bay, a polar bear met us in the water. It swam away before we got on anchor.

15/8: Woken up at 06:30 by a polar bear who tried to climb onboard! The boat with its crew would make a delicious warm brunch, but luckily we woke up and chased the intruder away with sharp sounds, these bears dislike that. The bear had scratched the hull severely, and destroyed one of the large fenders with its claws and teeth. 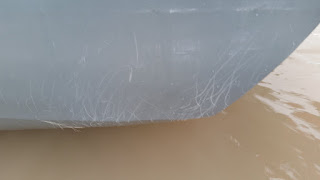 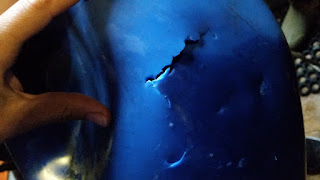 A lot of polar bear watching followed that day: a mother with two cubs was walking the beaches, and two adult bears were basking around in the stony hills. Naturally, we made no attempts to go to land. 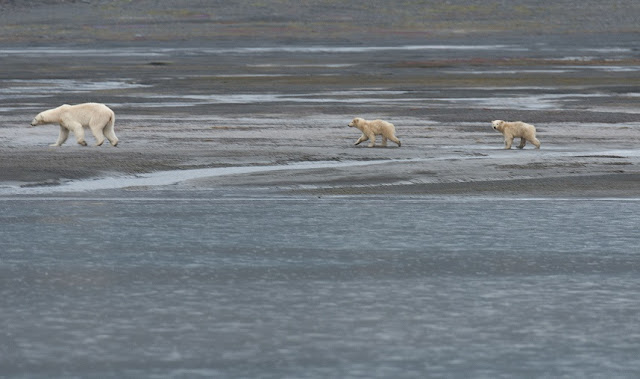 16/8: Storm was calming down out there, but there was still a swell - we could not go out, but we needed to fill up our water reserves. No bears present, so I armed myself with the rifle and kept a watch-out while the rest of the crew filled up canisters from a nearby spring. I had of course done some shooting practice both from boat and from land, to get the brand new gun to aim properly. 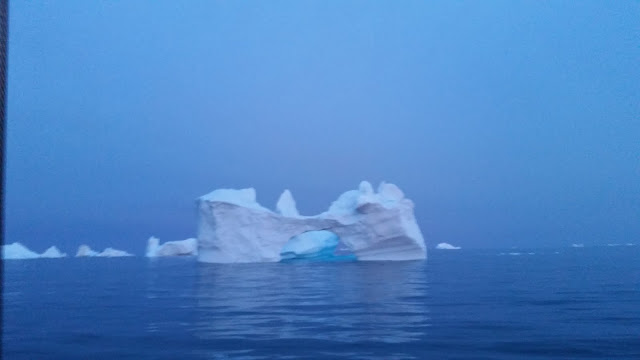 17/8 Cake for breakfast, the moral was great as we left the bay. We continued down the uninhabited coast of East Greenland, further and further from civilization. We entered the Nansen Fjord and sailed around Søkongen Ø, in enormous amounts of floating ice. Anchored behind Cape J C Jakobsen, inside the mouth of Rybergs Fjord and a bit to the W. A lot of icebergs in the bay, but they did not move too much so we were undisturbed while anchored. Went out in the evening for some terrain recon. 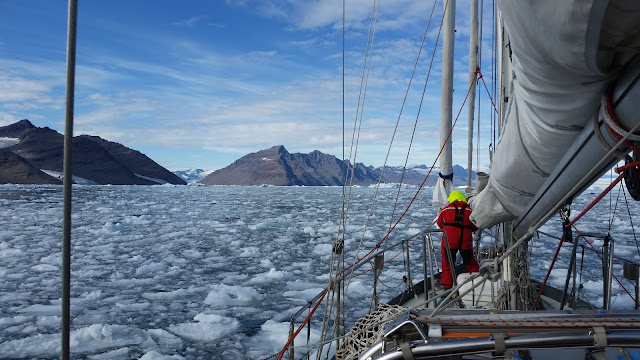 18/8 Set out for a summit attempt together with Eva, forced to turn for safety reasons. Both were however very satisfied with the hike, it had lead us to great heights and incredible views. Pulled in the fishing net that we set out earlier. It seemed heavy - but it was not because of the fish. A tiny seal had got entangled in it. I cut the net open to free the poor creature, who was about to drown. The baby seal got the water out of the lungs, and could swim away safely. 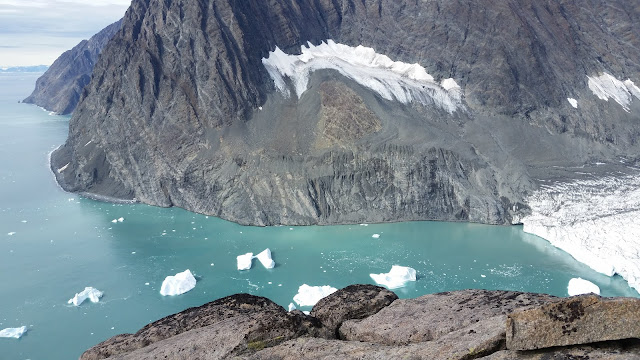 A glacier calving icebergs into the fjord.

19/8 We sailed off to the next large fjord, called Kangerdlugssuaq fjord. By this time, the cold really got to me. A humid environment with a lot of salt in the air, and just a few degrees above freezing point - it really gets into your bones. My feet would not warm up despite triple woolen socks. When not on watch, I was in my bunk inside of the sleeping bag, trying desperatly to warm up. 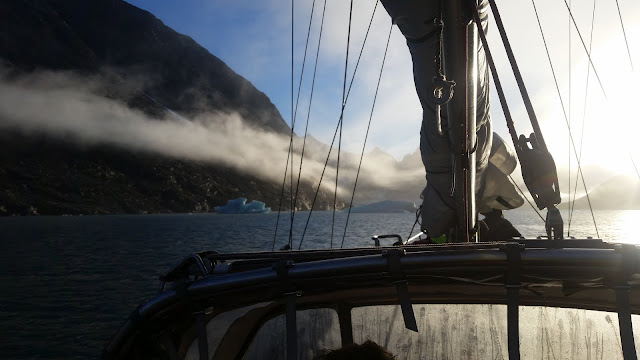 Leaving an anchorage, a cold and early morning

20/8 On anchor outside Kræmer Ø. I instruct and guide the group in glacier walking, and we set off to a glacier on land. We beach the dinghy to reach the glacier, and the mud on the beach clearly shows a footprint of a large polar bear. I keep an armed lookout at all times during the hike. When we come back, the tide had advanced a couple of meters, so getting into the dinghy requires some acrobatics. We sail off late at night and try to reach the island with the weather station - but it is much too dark. The midnight sun has now gone and the nights are pitch-black, so navigation is hazardous. The GPS is offset at those latitudes, the magnetic anomalies make it even harder, the bays and sea floor are poorly charted, the echo sounder was malfunctioning because of the severe cold, and finally there is ice everywhere in the water - and in the moonless dark, it may be almost impossible to dodge the icebergs. I was standing on the main boom, another lookout on the fore, but after a few hours in the cold we had to abort and move on to the open ocean where there would be less ice, and less possibilities to hit any uncharted skerries in the dark. 3,5 hours sleep that day. 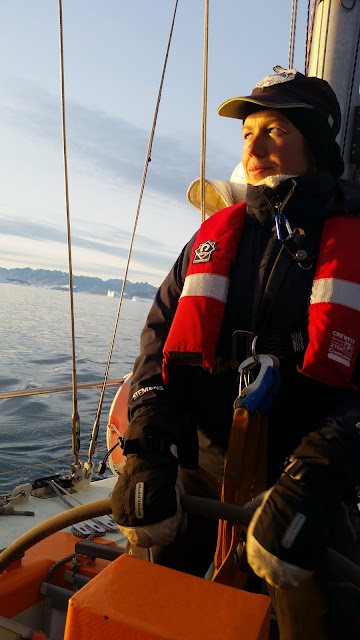 Me at the wheel, East Greenland cruising

21/8 We make our way South. Still much ice, a lot of haze, and very cold. As we cross the polar circle, me and the crew throw a surprise party - everyone suddenly showed up for dinner in full evening attire. Much appreciated celebration! Rum was involved. 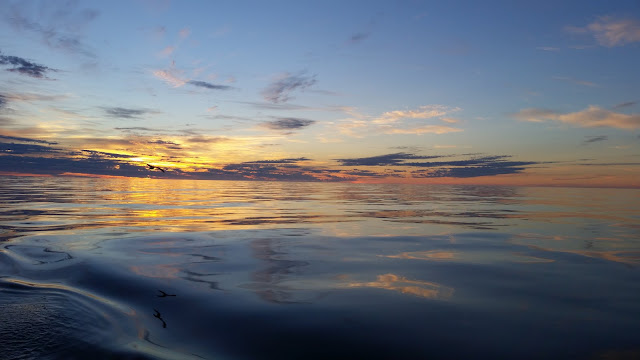 22/8 Sailing past Kulusuk, towards Ammassalik. Finally, a brief moment of cell phone net coverage! There was no possibility for using mobile phone for 10 days now. Internet is still not an option, there is no data roaming to speak of. We anchor at Tasiilaq. Eva sets off to an urgent matter, the rest of the crew stay for another day to relax and celebrate. We dine on salted horse meat from Iceland, and red wine. The night greets us with amazing Northern Lights. 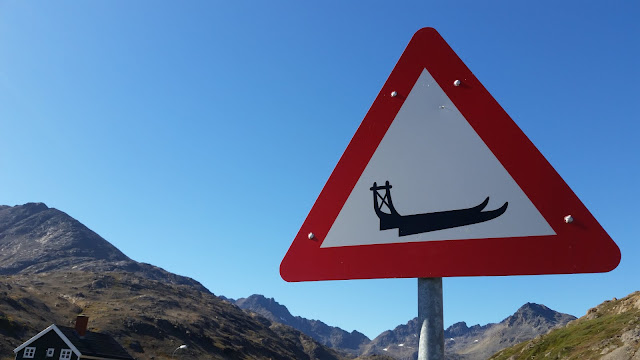 23/8-26/8 Old crew/guests are gone, preparing the boat for new guests. Trying to get hold of internet and talk to those who wait at home. Get more water and more fuel for the continuation of the trip. Visit the different places in Tasiilaq, and learn a lot about the place and the people. Take a hike to the Flower Valley, again with the rifle to protect the group - polar bears are often seen near villages, as they are attracted by the feeding possibilities. Also: take a warm shower for the first time in 2 weeks, which feels just amazing.

27/8 We leave the harbor in the morning. Aboard are Ismael from Canada, Sonja and Robert from Holland, and of course me and the Cap. We anchor away from all villages, up in a fjord, just next to an abandoned US military airbase from 1940-s. The skeletons of airport buildings, cars, generators and infrastructure, as well as the thousands rusting oil barrels, add up to a very spooky feeling. Again, I bring along the rifle in case of bear attack, and keep a close watch on the surroundings. We make a bonfire in the evening, grill some lamb from Iceland, and watch the Northern Lights. 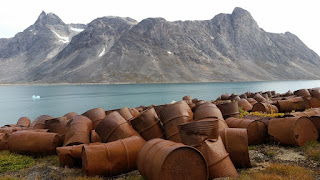 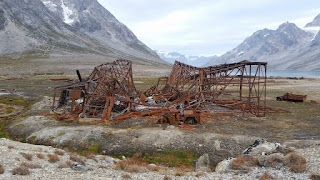 28/8 We leave early in the morning, after I pick up the fishing net which has been making trouble in the disappearing tide (while swearing and bitterly freezing). I did some charting of the sea floor the day before, but the tide may be up to 3 meters here, which makes the readings very... relative. We move along the Sermillaq fjord, past the Sermillaq village. There was no wind whatsoever, so we motored. 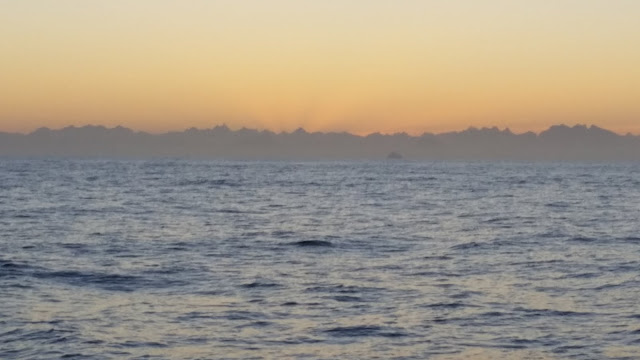 29/8-31/8. We have now left Greenland's coast behind us, to get back to Iceland. It's an uneasy sailing, the swell is coming from the side - but we cannot wait it off, since a potential Beaufort 10 storm is moving in. The wind is picking up, so we are making 7+ knots with well-reefed sails. Dozens of porpoises keep us company, ride the waves around us and jump happily out of the water. The crew is not as happy - most are severely seasick. Me and the Cap are the only ones unaffected, and share the shores aboard. 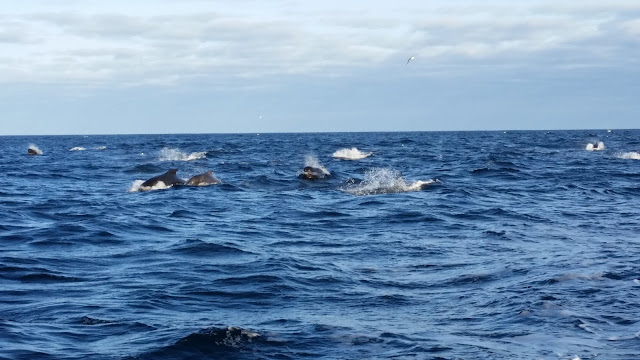 31/8: We enter the port of Reykjavik, greeted by a rainbow over the city. The sailing has been successful. I am back in Iceland, to where I had sailed from Faeroe Islands earlier this Summer.

Please see the other blog posts about sailing with s/y Mae West from Tromsø, Northern Norway to Svalbard - and about sailing Faeroe Icelands to Iceland. 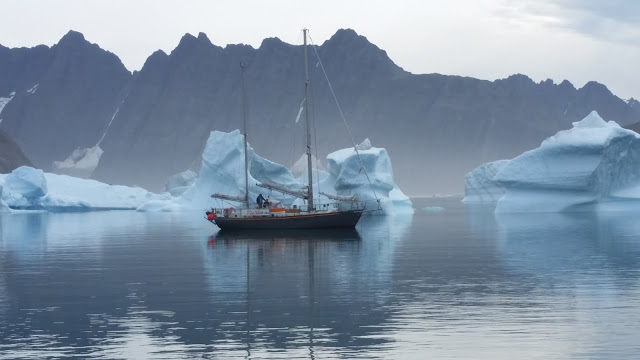