on August 23, 2012
How did I get into this mountaneering madness? I happened to shake hands with my cousin one summer, and decide that we would try to conquer the highest mountain in Altai. None of us had done any alpine or climbing experience previously. But how hard could it be? This was back in 2012 during a roadtrip in Siberia, so as soon as I got back home a trial run was to be run.


It was August, so Sweden's highest mountain Kebnekaise was already receiving its first snowstorms, and had to be put aside until later. I realised that Norwegian Galdhøpiggen is higher, but might be more accessible for a beginner. So I went, unprepared and alone - because how does one truly test one's abilities otherwise?


I took the plane to Oslo, the night bus towards Lom, and a taxi to the Spiterstulen side of the mountain, the last outpost before trekking starts. I dropped the bag at a DNT cabin, bringing ample food and clothes supplies with me in a daypack, and set off along the path as the sun was rising in thick rain clouds. 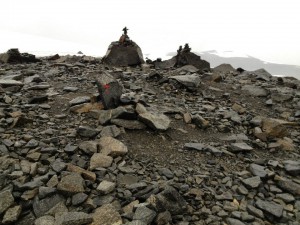 Such mountain paths are very well-marked in Norway. They are also well-mapped, and maps are available for anyone and everyone at ut.no - which is a great thing to inspire people to do activities outdoors, and stay safe at the same time. (Back there, I had no idea about the web page or the app!)


The rain poured during the whole ascent. There was snow up on the mountain despite being late summer, the weather was cold. It was all in all miserable. I was definitely undergeared, with mostly heavy-weight military gear like cotton pants. No trekking poles, no waterproofs etc. I had brought crampons, but had little use for them, despite snow appearing higher up - there was no glacier ice to get the crampons to do their work. Only patches of loose, wet snow. 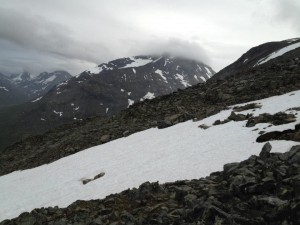 Mostly, the path was running on rocks or between rocky areas. Some areas required scrambling, but they were not many. A ridge before the peak was a bit steep on one side, but as long as one remembers not to fall over, it's not dangerous at all.


I was the first to summit that day, completely suprising the boy who worked at the top cabin. Yes, there is a cabin up there, selling overpriced tea and cookies, and providing a nice rest and a bit of warmth and protection before descending.


I was expecting a lot of emotions and victory feelings at the top, but frankly, I did not feel a thing. It felt strange that people talk so much about this great feeling of standing on a summit - yet here I am, at the top of Northern Europe, and now what? I feel cold, wet, and a bit dumb, I could have been at home and not had to endure all of this. The only thing was, I was happy to start the descend, since it was going to be easier. This was later going to change - with greater challenges comes greater elevation... 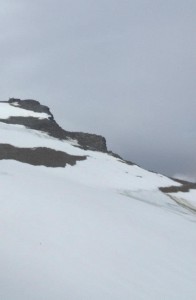 I was not only undergeared, but also physically unprepared. I had to stop and rest every few minutes, and stared in wonder at how whole Norwegian families with kids happily and energetically scrambled the same rocks. (Now I know that it's a Norwegian quirk to teach kids trekking and skiing etc at a very tender age, but it looked very sadistic back then). My legs were tired to the point of shaking, as I was reaching the valley below. Fortunately, I picked up that one could use the snow-covered parts for sliding down on the butt, as other trekkers flew past me on the way down. The trick is to brake well before the snow part ends and the sharp rocks begin!


I had descended in time for lunch, and filled up energy levels with canned food that I had brought with me. This was before i had a portable stove, or hade discovered the joys of MREs... After having lunch, I realized that I still had time until the bus tomorrow morning. What to do? Yeah, Glittertind is just next door, let's go. Crazy? Definitely. How did it go? Find out. 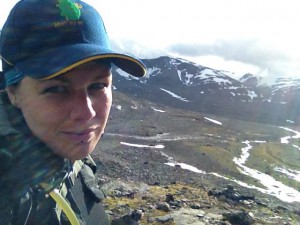