"Nothing great is easy" 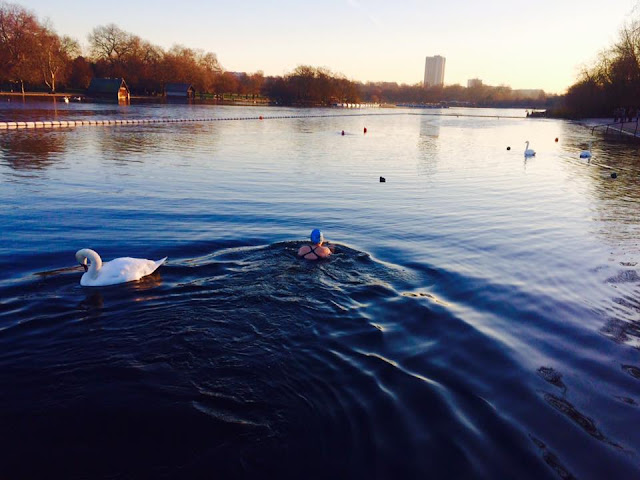 I met this ultramarathon swimmer today. Her name is Nora Fowler.

First, I’ll tell you what she does. She swims for many hours straight in cold water (UK or similar), with no wet suit – only swimming wear. Such marathons usually take many hours of non-stop swimming in open waters. There is a follow-boat for safety, but the swimmer is not allowed to touch it, or touch anyone onboard – they pop down a bottle of carb water every hour or so, and take care of the navigation and contact with the coast. Sometimes there is a heavy boat traffic. Sometimes there are currents of several knots in all possible directions, and there could be risk of missing the coast. In some waters, there are sharks, and she refuses any caging or repellent armband when she plans to swim in these waters. Her point is that she is the one entering the shark’s habitat, and she must respect them; killing a shark or hurting them in some way for the sake of her swimming fancy is not topical. Very fair.

Her stories are incredible. While I tell about me sailing through thunderstorms with lightning all around, she tells about swimming (!) through the same. While I tell about people getting seriously seasick onboard, she informs me that it is in fact possible to become seasick while swimming if the waves are large enough. “For a few hours, I was just threading water and being sick” – and she had to struggle for hours to stay afloat, unable to keep a single drop of the small amounts of carb water, thus losing more and more energy.

I do a lot of research on self-motivation and motivation of others, which I tell about on my seminars and lectures. I especially like to explore the extreme situations, borderline to giving up, and how motivation works then. So I talked to her about this. How does one keep on swimming after eight, ten, twelve hours, when the arms and shoulders are aching terribly, the whole body is tired, the weather is getting dangerous, sea sickness is ever-present, and the safety and comfort of the boat are just within reach - so giving up and breaking the attempt is ever so easy, just touch it with your hand and you will not have to swim an inch longer…

She is one of those fighters who never gives up. That requires a mental strength, and it does not come by herself – it is a result of a long series of struggles and challenging yourself. Her strongest motivation? She will not make herself or anybody else disappointed. “You have to compare the short-term relief of getting into the safety and comfort of quitting, to the long-term misery of knowing that you gave up”. And when that did not work during her toughest minutes ever – she thought about her father, who had travelled all the way to support her, and how disappointed he would have become. It’s all very simple – it’s not only about how bad you want to win, but also how badly you want not to fail.

She admits to me that during the thunderstorm and the sickness incident, she was almost hoping that the conditions would change to worse, forcing everyone, not only herself, to abandon the attempt. The warning was next-highest for a long period of time, and it was advised (but not mandatory) to break the race. However, taking that decision by herself was not an option.

We walked through the blooming Wimbledon park, and talked about mental strength and endurance. A symbolic touch to it was that she was walking with a crutch, but without complains despite the sharp pain. The foot inflammation started as a simple cut, which got infected while she continued swimming marathons, and the infection worsened. She was shivering from the fever but still competing, volunteering at competitions, and of course working hard day and night on her regular lawyer job. Basically, she was performing above and beyond what’s consider possible by regular standards, even without a massive infection affecting the physical and mental levels. She finally went to get medical help - just hours before it could have been too late. Luckily, her life and health were saved, but she had to stay in the hospital for 5 weeks, and was close to losing her foot.

Both her, me, and many of our kind have many more stories of enduring physical discomfort when anyone “normal” would have quit, asked for help, or never had found themselves in the situation in the first place. Why do we do that, even? Why do we endure discomfort to such great extents?

To answer that question, Nora readily quotes Captain Webb, the first person to swim across the English Channel:

“Nothing great is easy”.

I could not agree more.

Captain Webb’s legacy is revisited next summer, as Nora is already preparing for her next swim (the Channel, of course), and cannot wait until her foot is fine again.

When I told Nora I would be blogging about her, she asked me to mention the incredible support within the long-distance swimming community. “Crewing for swims and helping with training as well as offering huge amounts of advice and inspiration through their swims - people give so much time and love and rarely ask for anything in return, other than that those that have benefitted give back to the community as well”.

She credits a large part of the successful swims she has had so far to that support system. “Helping, supporting and inspiring each other is such an important part of what we (you and I and others like us) do... it's one reason I'm loving your blog! Talking to you over the weekend I again realised how important it is to be surrounded by inspiring people - like yourself and others that I am so lucky to have in my life - this must also be one factor which helps people keep going when things seem hard.”

PS: A mental strength coach I recommend for all professional athletes, but also for high-performing business people: Eva Sørung. You can still sign up to her coming seminar in May, or just contact for personal coaching.