Grand plan for this summer 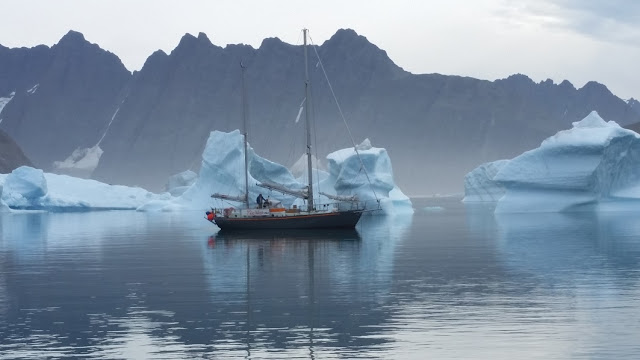 This is my grand plan for this summer. I am in need for sponsors for this adventure, please contact lena@adrenalena.se

Start of an Arctic Circumnavigation: the Northern Sea Route, Arctic Norway - through Arctic Russia - to Alaska. It will be made on a boat called Mae West (which I already sailed to Spitsbergen, Iceland, Faroe Islands and Greenland with). We will be at least 2 people, maximum 4. Mae West is a steel ketch of about 50 ft.

Some history. Around 1600 Dutch national hero Willem Barents overwinters on Novaya Zemlya in a house built from the wrecks and dies as he tries to reach the coast of Siberia with an open sloop. The three masted schooner Jeanette is crushed in 1881 in the ice and sinks in the Chuckchi Sea, all crew salvaged only few reach home. Close to Wrangel Island in 1893 the Norwegian explorer Nansen runs his vessel Fram beset in the ice and starts walking to the North Pole, he reaches 86 °13'.6N. The Fram is found later on the North Atlantic Ocean.


Since then, there have been many attempts, some successful. Recently it has been proved that the circumnavigation can be made in one season. I have no such aspiration (however I will go if the opportunity is given). The plan is to complete it in two or three seasons (summers).

Basic scenario
Calculation is based on conventional progress, this means if we don’t fall prey to excessive difficulties we will be able to make it to Nome, Alaska in 45 days. It is 3 more days sailing to Dutch Harbour with better options for flights home.

Over the last 35 years the ice break up at Kap Cheliuskin has arrived 3 days earlier per decade, it hangs on around Aug 15. From then the play of winds may blow iceflows open to the North or closing ashore, blocking our way as such and testing our nerves.

Super scenario:
Nobody can tell right now exactly what pattern of ice and weather conditions we may expect. If ice- and weather forecasts are in our favor we might start planning with better progress, we might even consider moving into North America. On Leg-2, the North West Passage we must count with end of season, and select landing where we may find shelter for wintering the yacht and from where there are flights to the civilized world.

Worst case scenario
We might not succeed in acquiring the permit to start or not allowed to cross the Russian border for other reasons. All permits are ready now, but Russian bureaucracy may change that.
The expedition might get stuck in the ice, something we will prepare for best as we can. All we can do in this case is to revise all plans.