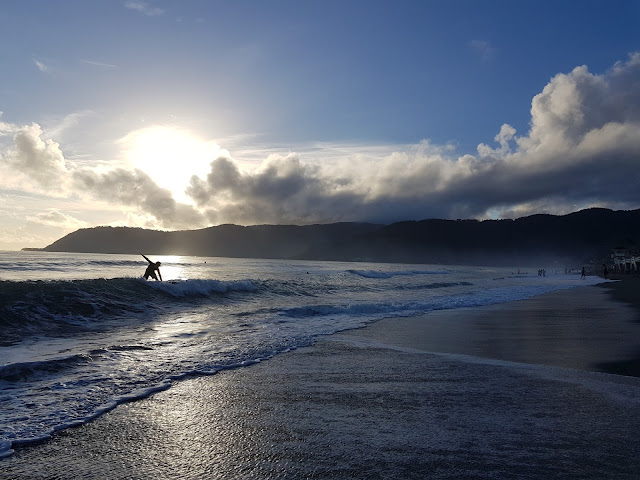 Mid-February 2018, I ended up in the Philippines, doing research for a literary project. Apart from sailing, researching, writing, and visiting the Tactical, Survival & Arms Expo in Manila (see report here and here), I also managed to do a deep dive into the very cradle of Filipino Surfing tradition. And, naturally, catch a few of those waves!

Baler’s Bay is bathing in the reminiscence of 70’s, worn and torn pavements, low buildings, and shabby surfboards. Some of the surfing instructors also seem to hail from that time, granddads made entirely from muscle and sinew. Most others are young boys, eager to pursue their passion, no matter the weather or the state of the board. It's hard to capture the feeling of the place on camera, but I've tried at least - and here are the results.

The fading white-washed concrete beach walk holds a line of hotels, hostels, and rickety homestays. There’s coverage for most of the wallet thickness range, but luckily no huge start resorts. Behind the beach frontline, there are more hotels, small shops, tiny eateries, and “transient houses”, in various states of construction and deconstruction. And no crowds, really. People walk about the beach, some take a dip, most surf. Any real shopping is done in the “city”. Most tourists are Filipino.

From the look of it, the surfers would wear themselves out and retreat to the hostels to sleep off the travel weariness and sore muscles. But no – the party goes on in the nearby restaurant, with the line-up of ear-withering tunes. Is that because of the Aurora festival, with the locals parading and all? And what will it be staying here for several days, with the building site noise during daytime and party music during night time? Heck, I’m jetlagged and want to get some rest. I ask the security guard if this happens every night. He does not seem to understand the question, but grins and nods. Well, I’m wide awake regardless of the party crowds’ future plans. So I sit down and write.

On this beach, Filipino surfing tradition was born. The surf scene of Apocalypse Now! was filmed here. As the team left the location, they left the boards behind. The locals picked them up and have been surfing ever since.

As I bob around the wave waiting for the next set, I notice that the rest of the surfers are Filipino. There are sometimes a few westerners being pushed around on long boards by their instructors, but I can count them on the fingers of one hand. After all, it’s not too simple to get there.

As a tourist, you don’t drive in Philippines. If you are a seasoned driver with a long experience of negotiating busy Asian roads, then that’s fine, although preferably not by night. All the rest better take a cab, a bus, or get around by fetching a ride with a local sidecar motorcycle, the most popular way to get around short distances. To get to Baler, there is a choice of two bus companies – Genesis and Joy Bus. They are sister companies and operate from the same place. The tickets are only bookable online until 4 days before departure. If you missed that, you’ll have to come to the terminal and get them on the spot, very non-digitally. 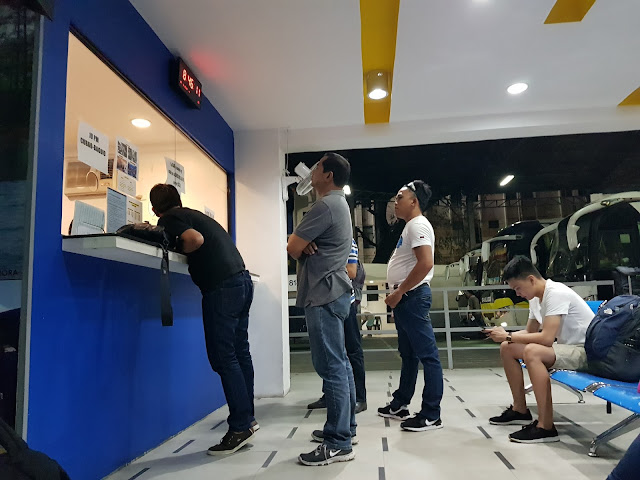 There is a limited number of seats on every departure, so it’s worth it to come early and get your ticket figured out. On holidays and tourist seasons, you may want to do it a couple of days in advance. Myself, I had a bunch of seats to choose from, the bus was almost full 4 hours in advance - but I’m confident I could get going the same night even if the first bus was full. 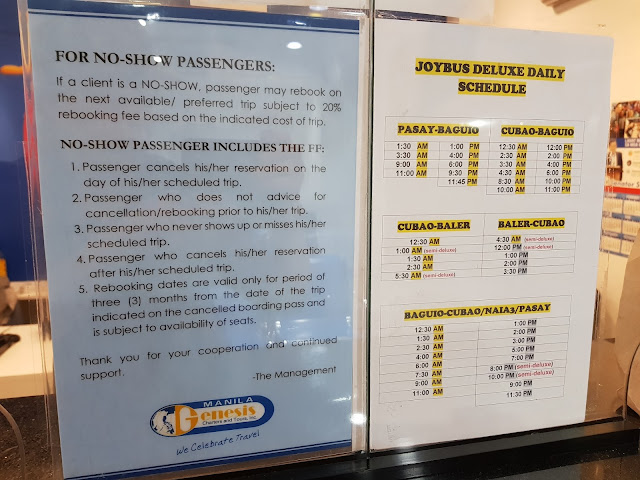 The EDSA Cubao bus station is a taxi drive from the airport. The taxi drivers know where the Genesis bus stop is, and they will drop you off near the ticket stand. It’s a open-air terminal. There is a small roofed waiting area near every bus company spot, generally well-lit and with visible guards. I would definitely not wander off from the terminal in the dark, but just waiting around there felt reasonably safe. Except for the heat and the constant heavy exhausts, the 4 hours were tolerable.

Genesis buses are supposed to be less luxurious, though still upscale, and take more time to get to Baler. Joy Bus is promoted as the most modern. That also includes the AC from hell; all of the sources of the internet suggest that you should be dressed for an Arctic expedition. I thought that only concerned the locals who were too used to the heat. Well, no. I had just arrived from the snowy Sweden with outside temperature constantly below freezing – but having like 10-13+ C for several hours while you are absolutely still and trying to sleep indeed requires not only a thick jacket, but a hat and a scarf, plus all the layers that you carry in your backpack.

They do give out thin fleece blankets, together with 0,25 l of water and a cookie. That’s not sufficient for 5 hours, at least in my book – come prepped. More water and snacks can be bought prior to departure, from a small stand just by the bus parking. There is a toilet on the bus, but it’s not upscale at all, mildly put. The bus does stop somewhere half-way if you really need to go.

The AC will be a bit more tolerable towards the end of the journey. Expect many sharp turns, sudden stops, and generally a shaky road, especially towards the East coast. But believe me - it's worth it.

The bus may stop for a drop-off or two along the way, but the final stop is in the middle of Baler city. Get a side-car motorcycle to your hotel, or directly to the beach. Taking the first possible bus upon arriving to Philippines (00:30), I arrived just before dawn. There were several bikes to choose from, and no hassle getting to the water. The locals are just getting up by that time, so it’s possible to both grab a coffee and ask around for room rates. Seemed that there were no (somewhat acceptable) places that would have a single room with a fan and private bathroom, on the waterfront, for less than 800 php. I was not really in full negotiating mode though, could be that there were even cheaper alternatives.

The beach is gray sand, with stretches of small stones, and there are a couple of riverbeds along the long beachline. There are no beach chairs or similar, and nobody is sunbathing directly on the sand either – Filipinos’ beauty standards dictate that you rather buy a whitening cream than risk getting a tan. There may be driftwood, but it is actively collected. The beach is cleaned in front of the hotels, but the more South you go, the less clean it gets (mildly put). Moving North, the hotels will end, and you’ll have the beach for yourself, with a few more advanced spots. The most reasonable way to get to Lindy’s point or Charlie’s point and beyond is by trike or motorcycle, bringing along the board. Naturally, you can also walk you have the time, but my guess is you’d rather spend that hour surfing! The most advanced surfing spots are on the very South-East point of the area, where the waves are breaking on a reef. Cemento’s considered world class, but it’s suitable for pro surfers only.

Beginners and intermediates will not need to leave the area in front of their hotel or homestay. There are several points just there, and most lodging houses rent out boards and instructors. Do not expect too much of the boards; bring your own if you can. The ones that can be rented are sometimes just foam boards, or homemade hard-tops. A few proper second-hand boards float around the market, with various degrees of damages, and just as various degrees of reparation quality. When it comes to surfing instructors, the regular rate seems to be 150 php/hr, but they also differ a lot in quality. They may be eager and good surfers, but do check that: (1) they do speak English on an acceptable level, and (2) they are ready to actually instruct and teach, not just do the beginner’s towing and pushing service.


This is a very special place, steeped in history - from missionaries and pirates to the Siege of Baler and freak tidal waves. It is considered to be one of the better surfing spots in the country, but there are many more exceptional ones to choose from if you are willing to travel further. You'll have to fly off to the East Philippines, or to the outermost North - or endure bus rides for days. For those who do not want to wander off too far from Manila, there are the following alternatives:

- East coast is surfable from October to March, at Magra point and the Real slightly north of it, choosing from either sand beach breaks (all levels) or reef bottom at rivermouth (intermediate surfers)

- West coast is worth a visit thanks to the series of beaches south of Zambales. Most are surfable from June to October, some are OK December-February. Beginner to intermediate, mostly sand bottom. Allegedly it’s a bit more crowded.

You're welcome! For a recent interview with me (in Swedish), check out Prolead.se - the podcast can also be found on iTunes and ACast. And finally, some last pics from all corners of Baler Beach before I move on...