on July 10, 2018
When I started long-distance sailing and crossing international borders, the courtesy flag rule was for me new and exciting. The flag of the nation whose territorial waters you're cruising needs to be hoisted on the starboard spreader. How many can I collect, maybe even display the flags somewhere? But when I started rounding the Earth, it quickly became a problem.

Firstly, it's expensive to show courtesy. A flag may cost something like one person's budget for a day, or even three in some countries. When sailing around the world, such expenses may add up to dramatically shorten the trip. So I took a proactive approach! Out at sea, you're forced to use your brain and hands, instead of throwing money at the problem.

Somewhere along the way in Southern Europe, I found a textile shop where I bought the fabric in all basic colors, and a sewing kit. Time is something you always have loads of on board. So I made them myself. They maybe weren't pretty like the ones for sale, but they bore true memories.

But then I arrived to the second challenge. What's the next flag? Surely you'd know that in Europe, but it's harder the further away you get from home. How about all the Caribbean nations, do you know their flags? And can you really plan ahead, so that you start embroidering a few days in advance to get ready before the Cayman Islands? There is no Internet out at sea, and since I also kept mobile roaming on a budget there was really nothing until I'd clear immigration and customs and then headed for the local sailor pub's free wifi to check mail, weather and similar. So you better do you research before entering any new territorial waters.

The last boat I've crewed on this summer for a long passage, Archangelsk to Kirkenes, actually experienced lack of guest flags as a major problem. Russian guest flags were nowhere to be found! Whereas you can buy any amount of flags, t-shirts or merchandise with coat of arms or country leader in Russia, there are few to find abroad.

The skipper of the boat did not manage to get a Norwegian flag either, and as we were entering the Arctic Norwegian waters, some courtesy had to be shown. What to do?

There was no colorful fabric on board, but I managed to find marker pens and a towel (about the most massively useful thing an interstellar hitchhiker can have, remember?) And so I started creating. 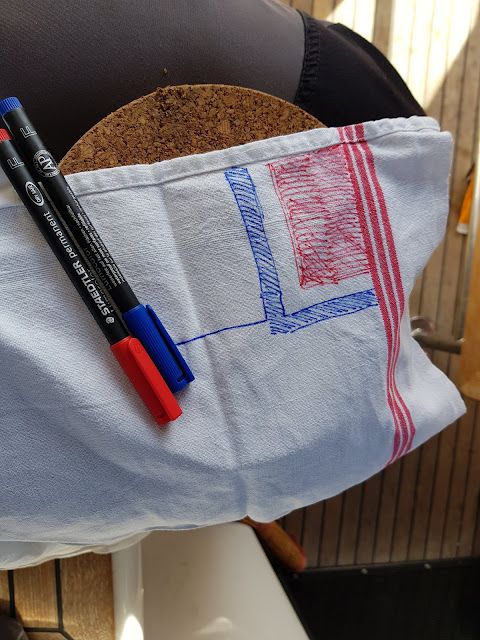 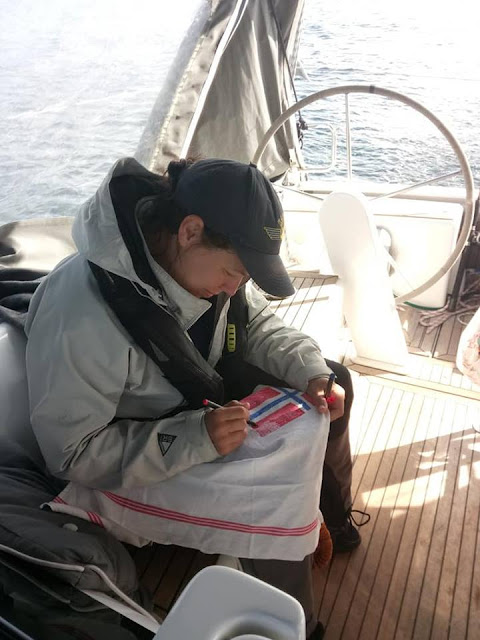 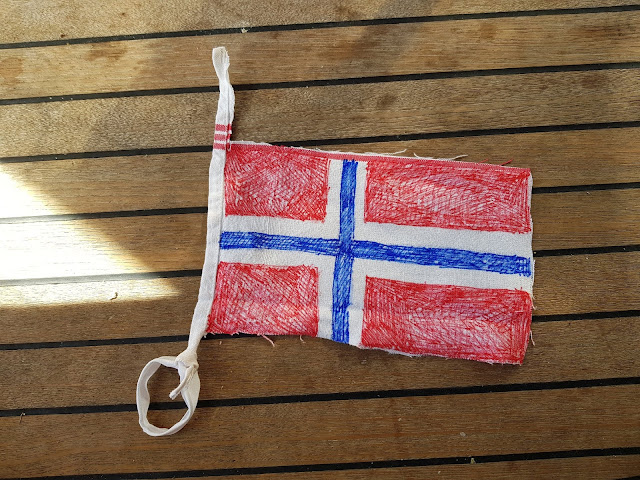 The flag was painted on both sides and was ready to be hoisted! As I did not know more than the first classical line of the Norwegian national song, and not even the tune either, I made sure to hoist it very quickly whilst shouting "Ja vi elsker dette landet" on the top of my lungs.

The flag was too fragile, of course, to stay there. We needed to get another one, and surely they did have flags at the local Biltema! But we were stricken by another challenge here: all the flags sold in Norway were so large, that they were bigger than the boat's actual house flag... There were no smaller flags at all, they seemed to think bigger is better also when it comes to courtesy. But this time we decided it should not matter, since the locals really love this country!