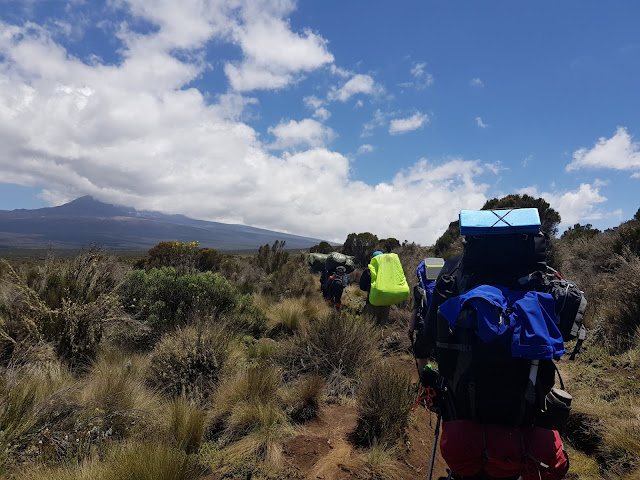 This post describes the first days of the self-sufficient "alpine style" Kilimanjaro climb through Lemosho route. Read about the planning and prep, about Barranco and Barafu, Summit day, or skip to lessons learned.

The first hiking leg at the mountain was short, maybe a couple of hours in total, starting walking quite late because of the preparations taking time, covering about 7 km and about 550 height meters. We went from Lemosho Gate to Forest Camp (also called Mkubwa camp, meaning “the big tree”). The sign read that it takes about 4 hours, but it only took us 2, so we were extremely hopeful for the rest of the trip. Once there, we hurried to set up tents and prepared for the night. The trees provided shade and wind protection, it was flat and the tents were easy to set, but the ground was quite dusty and it went just everywhere – did not want to imagine what happens when it rains and the dust turns to mud. The camp has running water and a toilet house, and of course a huge amount of tents and people around them.

We planned to spend the next day acclimatizing, as it can be a big jump from 2650 meters over sea level to 3610, past an area of 3700+. The group members had earlier shown some considerable discomfort when entering such altitudes too quickly. We had the extra days, and I wanted to spend that time making sure the group is feeling well and not pushing themselves too many height meters a day. To my surprise, the guide was unaware of these plans, which I had reiterated with the organiser a couple of times. It’s an awkward position to have to figure this out while already on the way, but luckily we agreed to spend an extra day in the Forest Camp despite this not being the normal procedure. As a group, we were very happy with that, because on the acclimatization day the regular discomfort symptoms arose, and some of the group members were feeling very weak. However, already the day after, everyone felt very strong and all discomfort was gone - so we kept roughly the same speed with the full backpacks as we did the day before, when we struggled in the heat with our tiny daypacks!

The walk to Shira 1 was very beautiful, first 3 km through rainforest, then the bushy moorlands. It felt like going through a botanical garden, with flowers and wildlife everywhere. On the way back from the acclimatisation walk, the tourists were gone so we shared the forest with the birds and animals. We got to see Hartlaub’s turacos with their huge red wings, and spot some large Black and White Colobus monkeys. In the night, the monkeys took over the Forest Camp and walked around, shouting at each other, smelling the tents. The first night in the camp was a bit exotic – then we got used to that.

Day 1 was for arriving to Forest Camp, Day 2 for acclimatisation to 3700+, and when Day 3 came, we relocated to Shira 1 camp. We walked in a steady pace, taking a water pause every hour. The sun was hot despite the weather reports showing considerably lower temperatures. The walk was supposed to be 7 km and take 4 hours, as shown on the sign, but already there we started to find out that both the heights and the distances mentioned on the signs were quite arbitrary. One of the members was tracking height meters on his watch, the other would take a reading concerning kilometres. The distance to Shira 1 was 10 km, but we could not keep measuring all distances because that would exhaust all batteries. So in this report, I’ll stick to the “official” numbers. The distance took us 6 hours, which included a couple of longer pauses.


As we came in to Shira 1, we found the scale and hurried to weigh our backpacks. The members of the group ranged between 18 and 25 kg. Myself, I was carrying 27 for the moment. One might ask why I was so careless bringing so much weight. Well, for one I do not really mind as long as the backpack is not over 30-35 kg, an extra kg or two does not make much difference. Second, as the group lead I take responsibility for facilitating the group’s ascent, which means I bring extra stuff for all kinds of situations. Reparation kits, medicines, extra gear, clothes items, food/snacks etc. Most of it turned out to be needed in one situation or the other. Some of it not at all, and I’m sincerely happy for that.

Also, we brought the extra weight of ice axes and crampons, to follow the recommendation of the organiser. What we did not know was that we’d not encounter any ice or snow. Probably very unnecessary to risk it, but I’d expect the locals to be more aware about how bad the conditions are on the summit.

We finished the day by washing up in the cold water found in the camp, and I planned to heat up some extra water the day after for a proper wash-up. The dust was everywhere, also we had been sweating a lot, which means we needed to wash off the sand and salt crystals from the skin to prevent chafing. I used a 10 liter folding bucket for getting water, which was extremely useful. While we were washing up, an ex-Air Force pilot came up to us to chat and express encouragement. We had a talk about his assignments in Europe during 1980’s and 1990’s. Amazing how you find all kind of people up in the mountains.

The morning in Shira 1 started out with a lot of condensation in the tent. The sleeping bag got wet, and I put it out to dry. Instantly, the humidity became ice. Both the tent and the ground were covered with frost. Such a contrast to the heat of the day that we had experienced while walking here!

Due to all the drying, we left a bit later than planned (08:30) and had an easy walk to Shira 2, about 10 km but only 200 height meters – taking 4 hours as the camp sign foretold, but about 2,5 in reality. As we arrived to the camp, it turned out that there was no water directly there. Once again, I was sincerely surprised. I had asked the organiser whether there would be water in the camps, and the answer was “yes”, up until Karanga Camp. Now it turned out that the water was about a half an hour away. Not a problem per se, but not the optimal situation if we wanted to have the grand washing up. Our lead guide must have understood that something was not right, and used some magic to get 20 liters of water from the local ranger. Once again everyone was happy, despite the washing-up being postponed.

Now, we could focus on acclimatization walks. We went to about 4200, as according to the assistant guide. The guides wanted to turn back right away, but I was planning to stay there for at least an hour for the acclimatization process to kick in. Suddenly, it started hailing. So, as a compromise, we stayed a half an hour, and then headed back through the beautiful landscapes of red-bearded back stones, and lichen-clad cliffs.

We were very surprised to find ourselves in quite good weather, contrary to the weather reports. I was counting on almost continuous showers during the first three days, causing everything to be wet. We were blessed with zero rain! There were few clouds the first days, and the sun was warming the air so much that the days could be spent with t-shirts and shorts. However, I stuck to the long-sleeved clothes to protect me from the dust and sun. The clouds at Shira 2 were a welcome change.


Up until now, all the camps had been boiling with wildlife. The white-necked raven was a frequent guest; pigeons were cocky enough to get into tents, and small birds picked around the camp, unafraid of the humans. One of the raven took by garbage bag and flew away with it, while I was not looking! A brave team member chased it, but it did not work. Throwing a symbolic rock, however, did. We managed to save the rubbish from being spread across pristine nature. At the same time, it could have been my day ration, or a small bag with gear, passport or keys. At least I was happy the monkeys stayed back in the forest camp; I’ve heard they are also capable of such crookery.