This post is about my personal experiences and after-thoughts about organizing and carrying out a self-sufficient hike to the top of Kilimanjaro, via Lemosho Route. To see the idea and the preparations, along with all that happened on the arrival day, see here. The first days at Forest Camp and Shira Camps are described here. Then you can read about the hike to Barranco via Lava Tower, and from there via Barranco Wall to Barafu. Finally, the summit day is described here.

To summarize, I would like to mention that organizing a self-sufficient Kilimanjaro climb is not straightforward, as the services on the mountain are streamlined around “high-altitude tourism” rather than alpinism. The companies want to make sure that all tourists are assisted as much as possible, so they manage to reach the summit (and can leave a good tip). An average tourist on Kilimanjaro is not trained in alpinism or adventure, has very little mountaineering experience, sometimes not even having done any serious hiking, and are fully dependent on the staff concerning carrying, cooking, and lodging. So, as an experienced alpinist coming to the mountain, you have to prepare to be treated as this “average tourist”. There is no way for the local staff to know who is really experienced and who is just telling tales, and they will not take any chances – your life and well-being is their direct responsibilities and they do not take that lightly. If you have a chance to tell them in detail about your previous experience, do that in advance and show photos of proof. It will help negotiating and will lower the amount of “baby-sitting” you’re exposed to. However, expect having a baby-sitter with you at all times while hiking or acclimatizing, and expect them to have their own agenda.

I will leave my opinions about the porter culture to another post, and will only describe what you need to know when booking a "self-sufficient" hike.

The fact that everything revolves around there “all-inclusive” tours with porters and cooks makes it harder to book something different, even if you shop around and carefully outlay your needs. You will be told not to worry about equipment, advised that you can hire tents (meaning several porters carrying 20 kg each between every camp so you can have your personal lodging all the time), etc. You have to be crystal clear about the fact that you want to bring your own personal gear and carry everything by yourself, what they call “alpine style”. Even after explaining that several times, make sure you repeat that upon arrival, reiterate your plans with assigned guides, and double-check all the details. Even having done that, you can’t be sure about the agreed details though – see examples below.

The normal routes are not technical, the biggest challenge being acclimatization. Do not attempt a fast ascent if you are not familiar with the exact impact high altitude has on you individually. There are rescue roads and heli pads, people being rescued daily from all the camps – do not tempt fate and become one of them. It’s no rocket science.

I’ve wondered what was the most difficult about the mountain, and I guess it was the fact that we were dependent on somebody else, their plans, rules and decisions. It’s a very unusual situation for me as a group lead, and it meant enough unknown factors to seriously jeopardize the certainty of my plans.

I was under the impression that I had been clear enough with the organiser when I had been explaining the itinerary where there were 2 extra acclimatization days, and one extra buffer day for weather or further acclimatization. Finding out we were booked to a “regular” 8-days procedure (without the buffer) surprised me a lot; of course there is no way to reclaim the difference in time and payment for those two days, we never even got a receipt. The organiser apologized for the misunderstanding, but I can never bring back the considerable financial investment nor the trust of the group members (or the discomfort caused by the lack of extra acclimatization).

The sudden announcement of “the new rule” considering Barafu Camp was something unexpected, that should have been addressed before we even set our foot on the mountain. The lack of the extra acclimatization day caused the group extra discomfort, and was the primary reason for the group member that was forced to abort at 5300. Luckily, we did not encounter any dangerous situations, but there is very thin margin for that, and I would have preferred it to be done according to agreed plan, to put it mildly. On the other hand, we did not have to spend an extra day in the storm, and we got a snowless night for the summit. But having all the cards on the table, I would simply have planned another route and another acclimatization scheme if I would have been aware about the one-day rule in Barafu.

Then there were the other, subtle but nevertheless important miscommunications. The organiser recommended to bring ice axes and crampons, that were just extra weight concerning the weather. I guess it’s hard to know in advance, but we could have left them in the camp instead of carrying the extra 1,5 kg all the way from the bottom to the top where we would not even be close to ice or snow.
I had asked about whether there is an internet connection on the route – hearing from others that had attempted the same route that there is normally close to no connection all the way, and wondering whether I should waste time and money on getting a local SIM. The organiser answered specifically “You will have internet on the mountain”. That was contrary to all my research, but it would have been presumptuous to mistrust a local person – what if there are new solutions evolving, and the situation has been changed? We bought a total 2 SIMs for the group, chock full of internet and ready to use. Upon leaving Moshi, we had no connection, and spent several days in vein trying to find some coverage. We could use only a couple of MB in total during the trip, because there was no coverage. Why this misunderstanding? No idea, I guess that the organiser gets a commission for every sold SIM, or maybe the local staff are used to receive a SIM will all the unused data from the tourists when they leave. Regardless the reason, this did not build trust, rather the frustration – I have managed months without the internet, it’s easy when you are not expecting anything, but annoying when the expectations are otherwise. 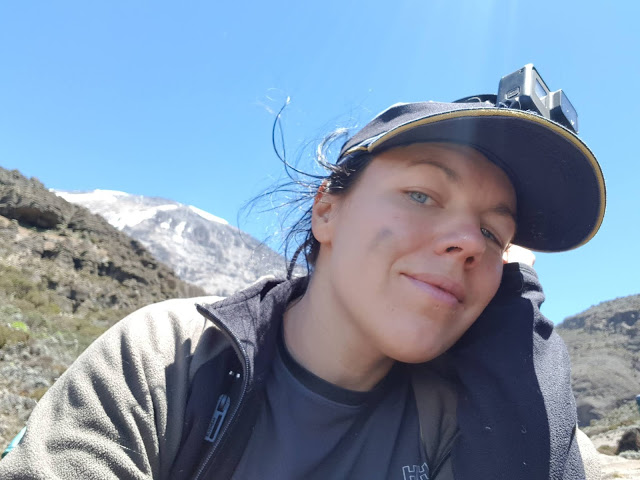 Lesson learned: no European gas canisters to find. And an Omnifuel run on kerosene soots quite a lot

The organiser also told us that there was water in all the camps below Barafu – which was not entirely true, as some camps had running water and the others required a half-hour walk to retrieve the same. It definitely made planning more difficult, and caused unpleasant surprises when arriving to the place where we would spend the night. The last camp, Barafu, had no water at all, and a solution to that was discussed and agreed with the organiser. However, once at the spot I was advised that the solution was not viable, and had to put dollars to work in order to figure it out. Yes, it was fixed at the end, hakuna matata and stuff. But this is not the way you do business or run adventures, and I was disappointed that I had to expose my group, that had put a lot of trust and a lot of finances into this, to this kind of uncertainties.

The lead guide did a lot to ensure our well-being on the mountain, and we saw him as a competent and trustful (yet possibly misinformed from the organizer’s side) expedition asset. The assistant guides and the portals were all professional and respectful, in all details and situations. A model behavior for any person working with tourism, sports or adventures. I’d want some guides from Europe or Russia to learn from them.

The best about the mountain? The weather. We were extremely lucky. There was no rain despite the wet weather report, expect for a short shower in Shira 2 (the tents were already up) and a short hail shower on the acclimatization walk to 4200. Even though we had a Beaufort 8 storm on the summit day, there was no precipitation – otherwise, things could get even more uncomfortable (blasting face with snow with that kind of wind strength is no joke). So all in all, thank you Kilimanjaro for the great welcome! Ah sante.

A foot note: I never use altitude medicines (Diamox and the similar), and do not recommend my group to use the same. Proper acclimatization is much better, in my opinion.

Another foot note: the description of the trip is not in any way a recommendation for climbers, or a guide to how to do such a climb. Every person and every group should plan the summit according to their own condition, experience, current situation on the mountain, and above all according to their limitations.