Kilimanjaro: to Lava Tower and Barranco 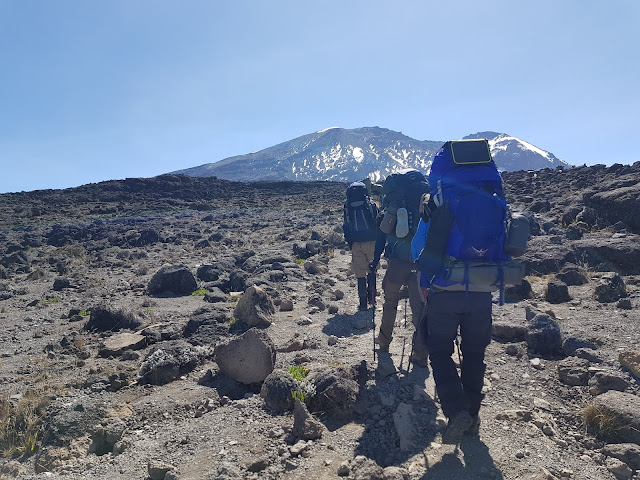 This post is about the hiking from Shira 2 Camp to Barranco Camp, through Lemosho Route that goes past Lava Tower. We continue further up Kilimanjaro, join up with Machame Route, and get ready for the summit camp. For preparations, see here – for the first days in Forest Camp and Shira Camps see here. To see the hike from Barranco see here, to skip to Summit day see here, or skip all the way here to see lessons learned.

During that day, we were to leave Shira 2 and walk further past the 4k frontier. We woke up early as usual. Condensation was still a problem – but now it was turning to ice, so the sleeping bag was actually freezing to the walls of the tent! We started taking advantage of the cold, since it’s easier to shake off the ice from the tent walls instead of wiping or drying it up. Also it’s simpler to crack the ice crust clean off the sleeping bag, instead of waiting for the moisture to evaporate from the within. Good times!

All of us were starting to get chafe sores on the hips, and sports tape (and bits of foam rubber) were passed around. Today, we’d head for Barranco Camp through Lava tower – a total of about 10 kilometers, going first up 750 height meters to reach Lava Tower and acclimatize there, about halfways, and then some 700 height meters down to Barranco Camp. We were reaching the cloud level now. At Lava tower, everything was in a fog. Tents were set up for the tourists to have lunch in, and there was a lot of people, a whole shanty-town of tea-coffee-lunch-water-toilet tents. 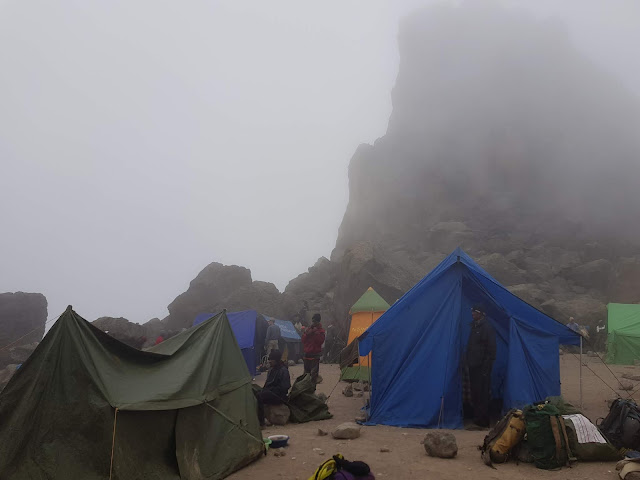 It took us 3 hours to reach Lava Tower, as planned, and the rest took us just less than 4 hours, including a long lunch in the vicinity of the Tower, just past a narrow way down, near a stream. We were starting to feel the altitude - some were a bit breathless, some light-headed. I tried to not stress the lunch too much, so everyone got a bit of extra rest. But by now, the day was getting a bit too long.

Past Lava tower, Lemosho Route joins up with Machame Route (Whiskey Route). We made a short stop on the junction, most were resting - but one of the members (Lars) was full of energy and started doing push-ups. With the 20+ kg backpack on. An impressive show of endurance and strength – most physical activities on that height make you breathless and weak. Still do not know how he managed.

The closer we were getting to Barranco, the more peculiar did the landscape get. Senecio trees, or Giant Groundsels, were everywhere, and Lobelia Deckenii was also visible. Both species are very exotic, and together with the mist from the clouds they created a sense on an unreal world. 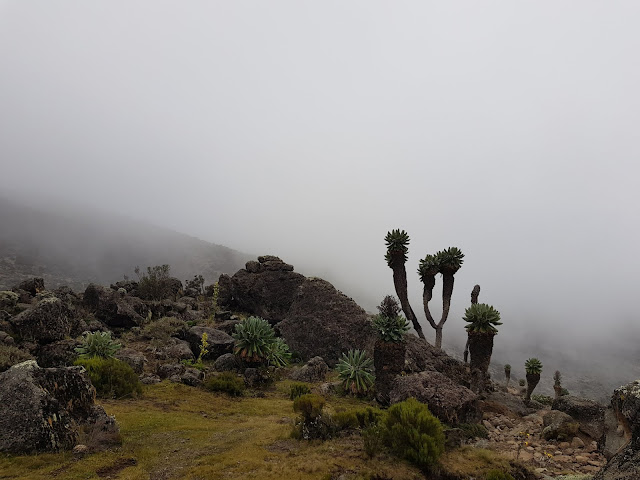 There was still a lot of wildlife. We saw some Jackal droppings closer to Shira 2, but it was not possible to tell whether they were spread out higher than that. Small rats (or large mice?) were present near the camps, and the alpine birds were definitely taking advantage of the human being present, still looking out for food and garbage. The monkeys were gone, but we were expecting to see more of them as we would use the Mweka route for descending. The birds and butterflies followed us along the trails, and some were extremely beautiful, however difficult to capture. 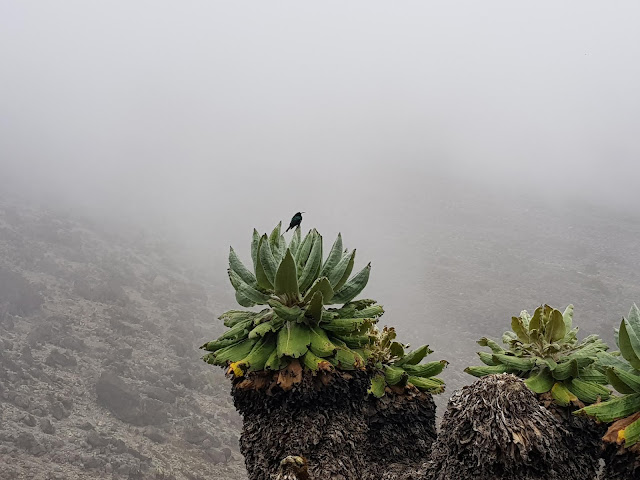 Barranco Camp did offer some internet connection, and I could download a weather report showing that no dramatic changes to earlier reports were present. Some members were very tired, the descent is indeed tiring and tough on the knees – pain and breathlessness craving a lot of motivation. So once again the evening was to be wrapped early. The routine was to start cooking water as soon as we arrive, while setting up tents and making a dinner. As soon as all thermal flasks are full, we would go to sleep. Usually, we’d wake up before the dawn to start having breakfast and begin to pack, so we can commence walking as early as possible, in the mild morning sun.

This evening, as there was some water, I made the promised warm bath. I had brought a tiny bottle of Milton Brown shower gel, and distributed it to the group members as they used hot water to wash off. It may not sound like much, but it’s an amazing luxury and a well-needed self care. Just having hot water touch your skin after a few days in contrasting warm, cold, wet and dry environments fell like a lick from a unicorn. At least that’s what it looks like when you watch somebody take a warm water wash out there.