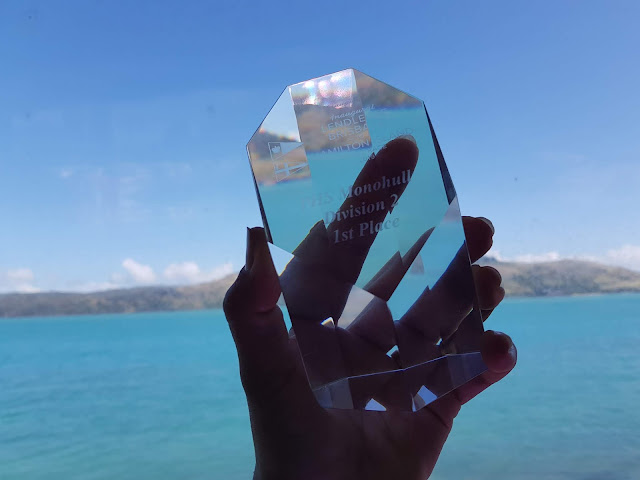 Time to tell the story of the offshore race of this month – Brisbane to Hamilton Island. I came over to join the yacht Ocean Gem for the race, this time as helmsman. This is the very same yacht that I competed on during 2017 Rolex Sydney to Hobart Yacht Race, and crossed Tasman Sea on this spring. The last sailing trip ended in Southport, and luckily I could join from there, sailing the boat over to Brisbane and preparing for the race.

There were a few jobs to do before the race, including urgent last-minute fixes. All of them were done in time with a great team effort. The last of the crew joined the morning before the race and we had a breakfast together at the yacht club – so great to see familiar faces from Sydney to Hobart! After breakfast, we packed some boat gear and crew gear to be sent in a container to Hamilton Island. We needed to go as light as possible, so a lot of unnecessary (yet convenient) stuff was removed from the yacht. The wind direction was going to be perfect, and we were hoping for good results.

The Inaugural Lendlease Brisbane to Hamilton Island Yacht Race hosted both monohulls and multihulls, the latter starting five minutes later than us. The monohulls competed in two divisions, and both got to share the start line. What a feeling to be starting alongside such boats as Ichi Ban, Wild Oats, Envy Scooters, Chinese Whisper, Gweilo… Ocean Gem had the lowest handicap in the whole fleet, so this felt a bit like David and Goliath, stepping up against teams of world renowned professionals that do big racing.

Ocean Gem was the first boat over the start line. We hoisted the #2 spinnaker and continued under spinnaker or gennaker for the rest of the race, changing to #1 spinnaker after two days to gain some extra results. The rest of the fleet were also flying kites, pushing the speed to the limit. Several boats blew their spinnakers, one participant broached just in front of us. We saw two boats retire, due to damage or malfunction.

The waters outside of Brisbane are frequented by all kinds of marine traffic. A cargo ship was on our route, but they called us up on VHF and gave us way by changing their course! During all my years of sailing, that’s the first time. Usually, they do not give way at all - and hardly monitor the VHF.

With the winds up to 25 knots, and following seas, we were surfing along. The top speed I had seen was 16 knots (and overall top 18 knots according to GPS), and we were often making between 8 and 10. The mixed crew consisted of 9 people, a very heterogeneous mix which is always great. There was quite a lot of accumulated experience, different skills and personalities.

We ran three-hour watches. Me and the skipper were at the helm during our watches, also interchanging every 3 hours. Usually, that was followed by 3 hours of sleep – however, when there were sail changes or gybes, all crew was helping out on deck, even if they had just gone to sleep. Afterwards, I've heard that three hours on the helm is considered to be much. I did not mind, since I had been doing even more whenI was crossing the Pacific short-handed without a functional autopilot. Standing on the helm meant I was active during the whole watch, and did notneed much more gear than shorts and t-shirt, while others had been fully kitted especially at night.

One of the crew was a chef from France who lives in Australia. He had prepared all the evening meals – ready to be defrosted and warmed. Good food is essential for great fighting spirit!

The helming sometimes required a lot of physical effort, and of course needed full attention all the time. Not only because of the traffic and reefs, but mostly because we were constantly flying spinnaker, affected by wavers and a fresh to strong breeze. Just a few seconds’ miss, just a few degrees off course, and the results would be disastrous. It makes you forget time. Sometimes I would hum a tune or sing for myself, for an extra soundtrack.

I had not done more long sailing passages since Tasman Sea crossing this spring - I was concentrating on other projects, including finishing the book. This means that my hands this time had lost the tough skin that appears after a lot of rope handling and helming. So already after day one now, I had blisters on palms and fingers despite using sailing gloves. I used some bandages and patches to protect the skin from more damage, and carried on. For the next race, I’ll have to prepare for that part – one trick is to continuously squeeze warm sand with the fists, to toughen the right spots. I’ve also heard people suggest using chemicals, but I’d rather just go sailing a few weeks prior to the race.

Night helming was the hardest. The moon was new, and the tiny crescent disappeared below the horizon early in the evening. The cloud cover was present most of the time, and it was great during the day - it protected us from the blasting sun. But at night it was not helping at all. The stars were almost constantly covered, and there were very few boats or beacons to mark the horizon or give a sense of direction. It’s easy to get disoriented when sailing into the darkness. With a spinnaker up, it makes it very challenging – both steering and sail change or gybing at night. It was hard work, but we were closing in on Whitsundays Group and Hamilton Island without damaging gear or crew(which is prio one of course), and keeping good results (which is also great).

We approached Hamilton Island at night, avoiding the pyramid of Pentecost Island by sailing with wind at 180 degrees from the aft, and came in between Dent Island and Hammo. Luckily, the airport was not operational at those hours – otherwise, yachts are expected to stop and give way to aircraft, something you don’t really want to do when you’re just approaching the finish line. The bowman counted “three, two, one, MARK!” and so we were over the finish line. Time was noted, engine was started, it was time to lower sails and get into the marina. The race committee congratulated us on the VHF, our skipper said thanks – “this was a hell of a race”.

We were across the finish line at 03:59, which means that we had sailed the 545 nautical miles in 2 days and 17 hours, averaging almost 8,5 knots. We had 15-26 knots of SE winds which gave the perfect conditions for us. During the race, our position rose and dropped, and we did not know just how well we did right until the race presentation.

After the trophies were received by Beau Geste, Wild Oats and Ichi Ban, the division 2 winner was to be announced – and suddenly our name was called up! Ocean Gem had won on IRC and on PHS, and we were to share the podium with these giants - Australia's best professional racing teams! Our skipper had all the crew come up and receive the trophy together with him, a great gesture - so radically different from the other boats. In my opinion, it’s one of those things that show how a tight and effective group can be fused together by good leadership - through trust and inclusion.

Even when we were sure that we wouldn't get the first place (the results were not always updated), the skipper would remind the crew to do their very best. Giving 100% all the time, no matter what, is one of the most important factors if you want to win. You never know what will happen - "the race ain't run 'til the racing's been done". Tables can turn in the last moment, and the only thing you can do is continue performing, and try not to make any mistakes.

It turned out that we won with a margin of six minutes. This means that each and every effort counted. Everything from sail change timing to well executed gybes, correct choice of course, and good trimming counted. Just one wrong maneuver could have costed us the trophy. Just a short while of not doing our best could have been enough.

The team's continuous efforts were amazing. The skipper David Hows had once again done a great job putting a team together, leading it, seeing all the potential and motivating everyone to reach it, by working hard and learning along the way. Also, without family members and friends this victory would be impossible, so a huge thank you to all of the ones supporting us from shore. Finally, a big thanks to the sponsors.

Celebrations continued, we had a chat with a few other competitors, and took some time to explore the tiny island. Ocean Gem would stay for some cruising, and later partake in Hamilton Island Racing Week. I had to get home before that. Next time I will come aboard the yacht will be in Sydney, this December, for the 2019 Sydney to Hobart. Once again I will be on the helm.

I took a couple of days to cruise Whitsundays on another yacht, a steel 45-footer currently cruising the area. The light cruising differs from racing considerably, and I had to rapidly change approach. I did not have to be at the helm all the time. We did not need to top the speed, or to have the perfect course. I could take some photos, do some chores like splicing, and even just lounge around in the cockpit.


Passing the Whitsunday Island, we went on to Nara Inlet of Hook Island to anchor off all the way inside. The evening brought sounds of kookaburras, crickets and splashing turtles. In the morning, a cockatoo came to say hello. It was great to have eight hours of sleep, and not to have to hurry to the helm – instead enjoy a nice coffee and a pawpaw for breakfast.

A short sail away was Airlie Beach where I would be disembarking. I spent some time running and stand up paddling there, and finally it was time to return to Sweden. Or that was what I thought - who would have known I would become stranded on the Arabian Peninsula and go surfing the sand dunes in the desert there!

My arms are still aching from the helming marathon, but I’m going home with my head up high. Towards next adventures!