The 2019 Sydney to Hobart, which was the 75th anniversary, was a great race, with 157 boats at the start line. I entered the competition on sailing yacht Ocean Gem again, having sailed and raced with them repeatedly before - this time as a helmsman and a watch captain. We were 11 people on board, two crews with 5 people each, plus the skipper.

Upon arriving, I took a day off to Kosciuzko Range for a bit of hiking, and summitted 5 of the 10 highest peaks of Australia in that one day - including Mount Kosciuzko (the highest in Australia) and Mount Townsend (second highest). Upon returning, my feet were a bit tired. My shoulder was hurting a fair bit from a falling injury a day prior to departure, and I was a bit concerned about the amount of helming I was going to perform during the coming days – it really grinds down the arms and shoulders. However, the helming went just fine, with low fatigue and low pain levels overall – but if I would have been on a winch, I would have had more trouble.
The start, as usual, was amazing. The Rolex village in Sydney was exploding with people, the spirit of sailing and celebration was all over the place! It was great to reunite with the skipper and the core crew, and to meet the new crew that would join us. Just prior to the start, we had to re-rig some minor stuff, and were done just in time to get on the start line. With so many boats sharing the same start line, it was exhilarating to get to a good position – it was crammed, and there was a bit of shouting in between the boats trying to squeeze past each other. We had a good start and tacked out of the Sydney Hobart, enjoying the good visibility that the offshore winds had finally brought.


With mostly reaching and running conditions, we were making a good speed. There were some mean waves coming in sometimes, great to surf off, but if you caught them slightly sideways then the boat was inevitably turned, which is bad news when sailing with spinnaker. On a dark and moonless night, it becomes even harder. But we were doing great.

For a while, about 150 miles into the race, we were leading (1st place) in all our divisions, and 2nd on IRC for the entire fleet of the IRC boats (119 of them). 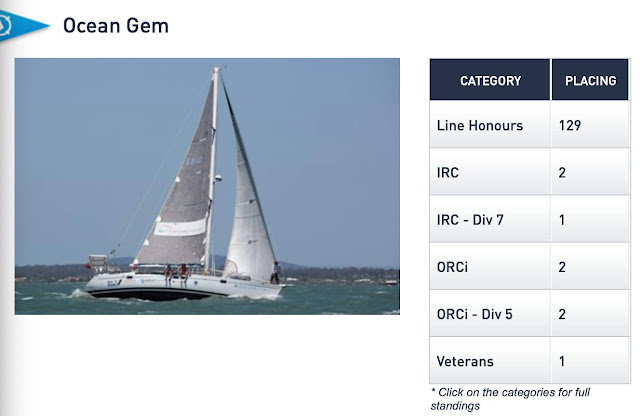 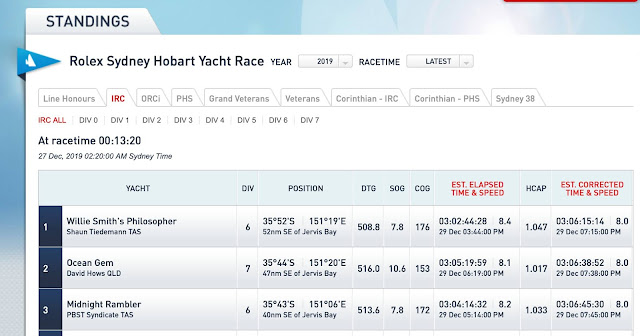 But then, things started breaking. A fitting blew, ripping the bowsprit so it looked like we’d crashed into an iceberg or something. 2 of 3 spinnakers exploded. We knew that other boats would have the same challenges, pushing hard downwind. I decided to mend one of the sails, the one that we would hope to use most. Of all the other boats who were pushing, surely several had ripped their sails. But how many would be mending them? If that was what was needed to stay competitive, then I’d do it.


It took… many hours. The rip in the sail must have been 20 or 30 meters long – but it felt like 300. The work was done one meter at a time, it’s impossible to keep the fabric stretched and straight otherwise. First, the sail needs to be cleaned from the salt with clean water, with sponge. Then it needs to be dried; there was a small fan onboard that made the process much faster. Then, the tape is applied – and when the tape was finished, I used large patches that were cut into stripes. The tape needs to be properly pressed onto the sail fabric so there are no air bubbles in between. Then, it’s time for the next bit. When one side is fully finished, you turn over the sail and continue.

I was still not confident that the reparation would hold, so I decided to add stitches through the tape. That also took several hours. At last, we had a #2 spinnaker again!

Upon arriving to Derwent river, the wind dropped off. We clearly saw boats on AIS, that had rounded Cape Raoul and just stopped. About 20 of them were sitting there in several clusters, making zero speed, or a couple of tenths of knots – in different directions, just like they were on anchor. It was in the middle of the night, and the Derwent was playing the good old joke on us – mixing all the cards at the end of the race by becalming everyone and adding currents. I’ve heard of this, but always thought it would never happen to me…

Some of the boats were definitely moving, but they were further away from the right-hand side of the river – more towards the middle, or to the left. So we took the long way around, trying to hunt that wind. A few boats that were in front of us headed to the right instead, and got becalmed right away. It turned out later that we finished before them.

What should have taken a few hours took a whole night and the whole morning – we negotiated the river between glassy patches, looking for the wind. That day was extremely warm, with +37 in Hobart which is extreme for Tasmania where you’d otherwise expect temperatures lower than +20 even in the peak of the warmest season. Nevertheless, we were fighting all the way to the finish, playing music and hiking on the rail to gain those precious minutes and seconds while we still could.

Approaching the finish line, we saw six boats sitting there becalmed, struggling to finish. We realised they soon would be seven. But suddenly spinnakers were flying behind us – a breeze was coming through! We quickly set ours, and soon were over the finish line – 3 days and 23 hours after the start.
I’m happy with the race. The fact that we held the #1 position for a while shows what we are capable of. Next time we’re faster, stronger and meaner. Yes, there will be a next time!

I stayed in Tasmania to do some exploration, and spend a few days travelling around the whole island. Ocean Gem also stayed, to circumnavigate Tasmania, which I would have loved to do, but did not have time for.

Other boats headed home. Unfortunately, this year there were many disasters on the way back. The race itself was relatively mild, only three boats retiring (due to steering problems and broken rudders) but the way back was faced with storm-force winds. It’s not unusual for the delivery back to mainland to be more disaster prone than the race itself. To start with, there are more amateur crew involved in the delivery back. Also, the security infrastructure that contributes to the event’s safety is gone. And finally, I must admit that after completing a challenge like Sydney-Hobart you feel a bit indestructible if not immortal. It becomes much easier to take higher risks and decisions that may jeopardize safety. These are dangerous waters, and anything can happen. One of the returning boats was dismasted, another one had two injuries on board. The third lost it keel and capsized, and one of the crew risked his life by diving under the boat to get the life raft to rescue the others’ lives. All this in extremely bad visibility due to severe dark smoke clouds that filled Bass Strait as the wind turned.

I never got too close to the fires, exercising safety and common sense. I was lucky; the fires engulfed the areas where I was hiking before sailing, and also came close to the towns and roads where I drove through Tasmania. I wrote a bit on the fire situation in Swedish here. It's heartbreaking to see how the fires affect the animal life and the people living in the area. Climate change has caused more extreme weather during the recent years, and my sincere hope is that we all can stop this, together.