on February 24, 2020
Cataluña and Montserrat is a great place in February. It's sunny, the temperature climbs up above +15, and it does not rain constantly. I just spent a February weekend climbing in Montserrat, and had an amazing time. The first day was spent practicing on the Gorras. But the biggest highlight was of course on Sunday, climbing the spire called El Cavall Bernat.

At its 1,111 meters above sea, it is prominent of almost 900 other spires if Montserrat, and is one of the 5000 climbing places around here. The Cavall stands clear from the surroundings, so the peak is very exposed meaning there is always wind on the top. It also means views right down into the valley with a free fall of several hundred (up to 1000!) meters, and all the possibilities for you to explore your agrofobia, or to acquire it if you didn't have it... It's like climbing up onto a 30-storey building, except it also stands on the verge of a cliff that is 1 km high. The views are... head-spinning.

The first ascent was made in the 1930's by Josep Costa, Josep Boix, and Carles Balaguer. At those times, climbing was made with plant-based ropes, huge mountaineering shoes, and hammering wood wedges into cracks for belaying. An outstanding achievement, it was even featured on black-and-white film. That route is called "the normal route" and that was what I attended, together with my friend Linda and a local guide Adri.

We chose to stay in Monistrol de Montserrat, a tiny place built around a monastery. You can take a train to there from Barcelona. There are a few places to stay, and one place to eat (check the opening times). Otherwise, El Bruc seems to be a good hangout if you don't mind driving.

From Monistrol village, there is a winding tarmac road to the monastery. Instead of taking the cable car from the monastery, we parked the car halfways, and took a hike along an approach trail. The views of the Caball were beautiful in the morning sun, and we also observed the Devil's Wall beside it.


The first 250 height meters or so (not sure how many kilometers in length meters) is hiking, with some easy scrambling at places. Then, the sloping slab starts. It's already steep here, and exposed enough to use fixed ropes instead of just scrambling. If a small stone falls down from under your feet, it becomes a bullet that may critically hit another climber below - so you have to be very careful in your steps. And wear a helmet.

After another 150 or something height meters (no idea about length meter still) with via ferrata it's time to start climbing. We were alone as we headed up the normal route, there was another pair of climbers attempting another route.

The crux comes in the beginning, with a traverse of 8-10 meters, right over the vertical rock face, and with the free fall under. The grade is V+, which is not easy to compare to what you'd climb in a gym. Sometimes, there is very much wind there, so the ropes just fly away horisontally.

Once that bit is passed, there is a maximum grade of V for the rest of the climb. The crack that is used continues up with a slight overhang at the end. Then it's time for the last pitch of three in total, about 90 meters of height.

From the top there is of course an awesome view. The Pyrenees are on the horizon with their snowy caps, and on a good day you see the sea. The peaks around are clearly visible, and the ground below looks like you're in an airplane.

This is an impressive ascent and it is known among climbers. When reaching the top, you apparently can call yourself a "cavallista". High fives and hugs were shared, some photos taken, and then we prepared for returning. The abseiling can be done from a steel statue of Virgin Mary.

We took the long walk back through another route. There was a bit of steep scrambling in a valley between vertical walls, along a power line route. The path was tricky and unstable, but the good thing is that we did not see a single person there, as opposed to the "autobahn" of tourists walking up Montserrat. 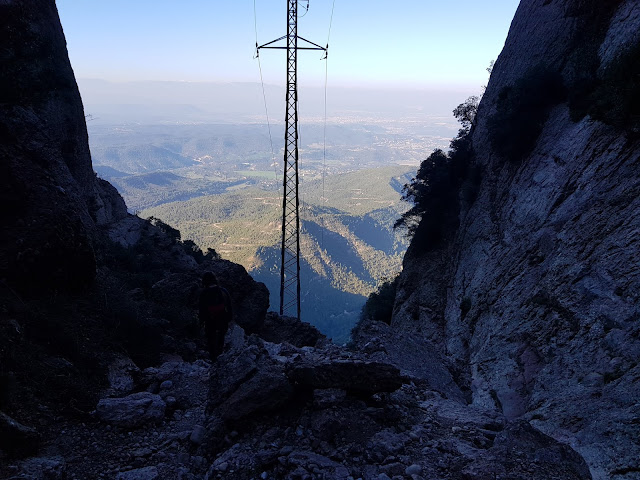 We did see mountain goats though! They are a major safety risk, as they kick down rocks while they climb the almost-vertical walls in search of food, or possibly adventure. You have to watch out, and if you see them above then you have to take cover.

The whole trip including the long walk back took 7,5 hours. All the credits to Linda who stood up to the challenge, and of course to the charismatic and knowledgeable Adri.

All the way to the top, I was hoping that there was some secret to climbing Cavall easily. I was thinking that it could not be as hard as it looks on the photos. But at the end, there was no secret. It was just vertical climbing, just physical and mental strength. It was in fact a bit harder than I thought because I was not used to the local rocks and did not fully trust the friction. But reaching the top was definitely worth the effort.

Climbing conglomerate rock was extremely different to the Scandinavian granite cliffs. Much like the chaos board in the climbing gym! I am already longing back to get some more of that. What I will not be missing is the mountain goat shit that you sometimes get on your hands as you look for a good handhold...

The day after was spent walking through Barcelona. I even got a while of well-needed sunbathing lying on the sands of Barceloneta, with waves gently rolling onto the shore. What a great ending to a short but sweet trip.

PS: the monastery of Montserrat is amazing. There are breathtaking views and hikes everywhere. The place is definitely worth a visit! 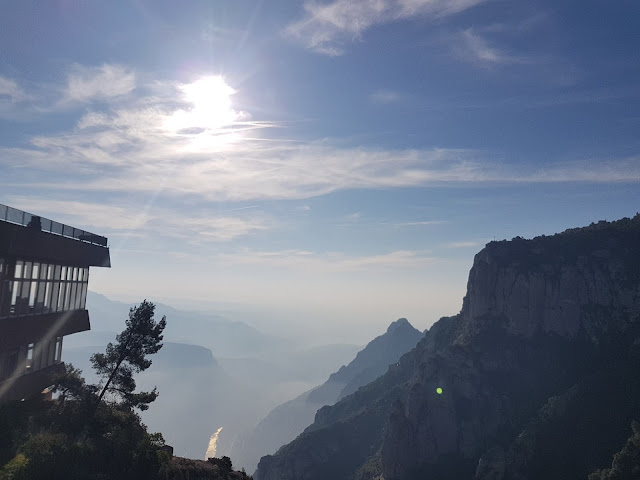 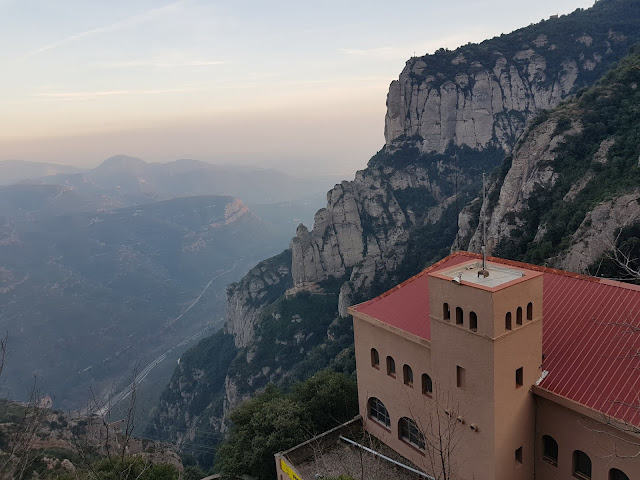 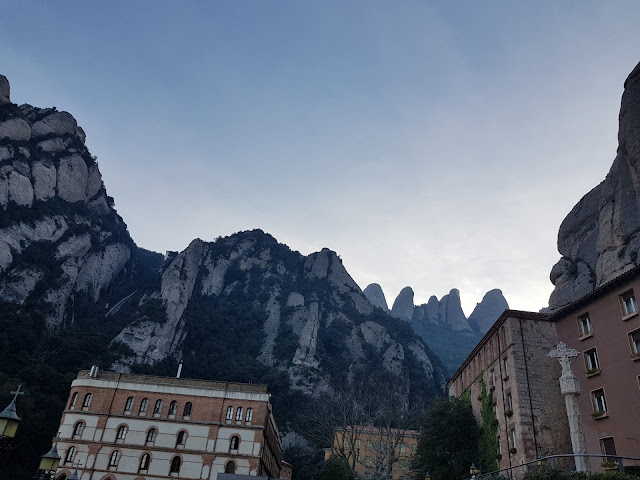 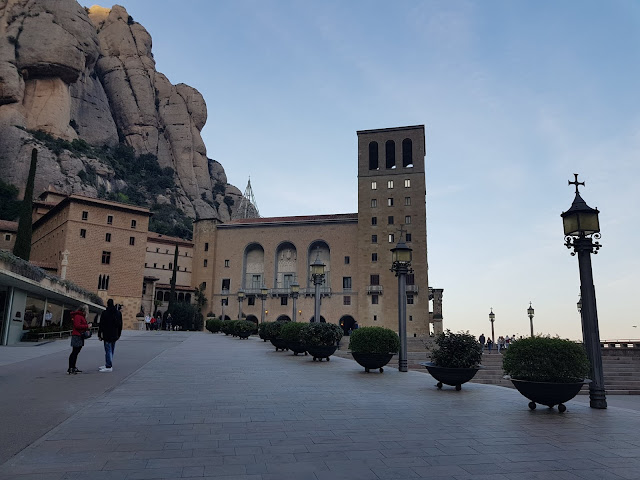 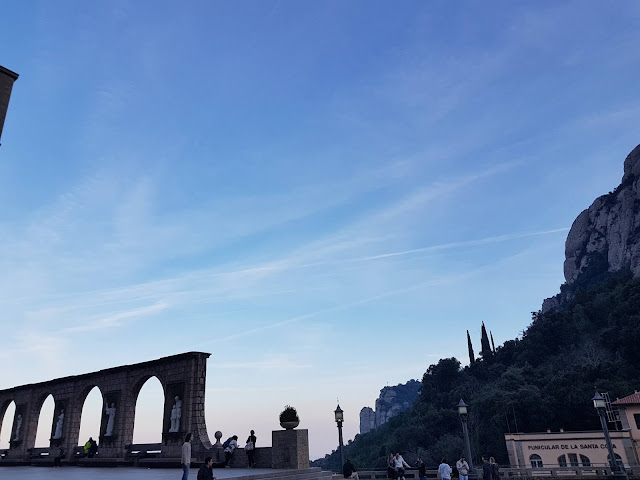 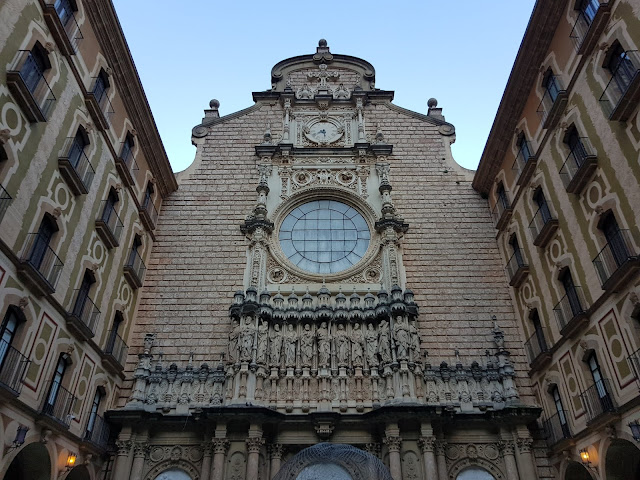