Ski hike to the top of Sonfjället

Sonfjället is one of Europe's oldest national parks, established over 100 years ago. Except for the actual mountain of Sonfjället (also called Sånfjället), there are some smaller peaks, streaming lakes, and a forest around the mountain.

Here is the video I made from the trip!

In the national park, there is a large elk tribe, wolves, lynx, wolverine, reindeer, ptarmigans, and a lot of small subarctic animals. Some musk oxen have been known to wander into the area.

The area also has a resident brown bear tribe that are hibernating in the winter. Occasionally, bears may wake up and roam, but it does not happen often. If confronted by a bear, it's important not to surprise or provoke it. Talk in a normal voice, so it notices you and can get away - usually, they are as wary of people as we are of bears. If it tries to attack you, it's because it is provoked. If you have a backpack or a basket with berries, it could be a good idea to leave it in front of you so it will catch the bear's attention, and to get away calmly and slowly. If it still wants to attack, make yourself look small and weak. Lay down in fetal position, protect your head and neck with your arms and hands. But frankly, the chance of meeting a bear in the winter is extremely small.

The peak of Sonfjället is 1278 meters above sea level. There are a few trails around, both for winter and summer time, but none to the top of the mountain. I chose to follow a winter trail, marked with traditional poles with a cross, still covered with snow as I stepped on it in the morning. After rounding Valmfjället, I chose to step off the trail, and continue free hiking into the saddle and then off to one of the peaks.

In the start, I just walked with the skis on my shoulder. The shoes are good for hiking, and below the powder the snow was packed, able to carry my weight. Otherwise I would just sink down halv a meter with every step, and would have to wear skis. The trail is occasionally used for snow mobiles up to a point further on, so that's the reason why the path is broad and well-thred. Later on, as I turned left to round the small peak of Valmfjället, the snow was softer and I had to take on the skis. On the way back, the snow on the main trail was full of holes - apparently, those who walk here do not care about stepping on the ski tracks.

At the start of the trip, two more people were on the winter trail, one also planning to do a longer ski trip. We teamed up, and had a great time chatting along. Felix works in the military, and with military research. He had done the famous Swedish Defence winter survival course (I recommend it to anyone who wants to do serious winter adventure). Now he was trying out his skills, roaming the snowy landscape just like his grandfather.

The trail had a very comfortable incline, which was not too demanding. It's a perfect hike to try out gear, or get a workout of a longer or shorter length.


As we left the tree zone, the views cleared out. The horizon showed other mountains to winter-climb. The low January sun colored them pale gold. Snowy forests as far as the eye can see to one side, and snowy mountainside to the other. 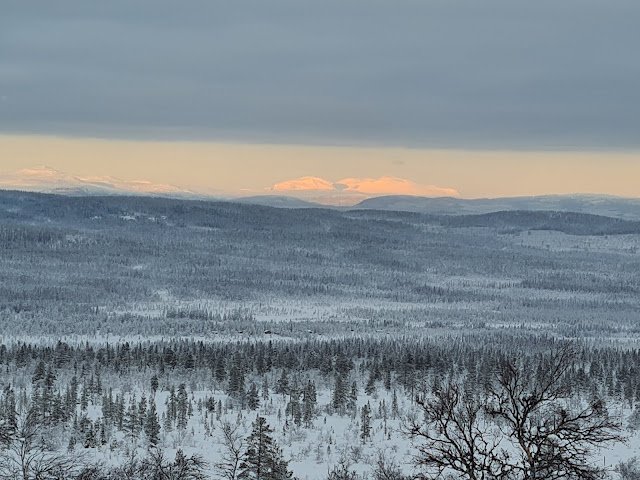 Of course, it's also possible not to make the turn and go the long way around. In case you just follow the well-throdden path, you will find another cabin, in the Sodo valley (Sodostugan). Apparently, it's also possible to grab some fika there, so it should be a decent family outing. Myself, I did not see it from the other side of the Gråsidan and Valmfjället. It's apparently also easy to reach Lilltoppen from there.

As we approached the saddle, a cloud cover came over and everything went white. We followed the incline, which worked quite well in the non-existent visibility. Then the clouds cleared as suddenly as they came.

There are two tops, similar in size, to visit. One of them has a stone cairn, the other has a tower. In the winter, the tower is covered in snow, ice and snow, making it quite a beautiful surprise - like a castle from a tale of winter wonderland!

The choice of approach from the West had proven to be wise, as the easterly wind had blown over all the powder snow into the saddle. As I skied down, I also was in the lee. The wind was not too strong, but if prolonged exposure to wind chill can be avoided then there is no reason to force it. The temperatures were about -11 C (without wind chill), and it fell warm - at least compared to the past days when it had dropped to -27C.

To reach the top, you need randonnée skis with skins. A good idea is to bring some snacks and drinks to refill the batteries before returning. Protection against wind and cold, and a map or GPS is a must. Make sure to keep the smartphone or GPS near your body, so it does not discharge because of the cold.

On the way there, the bindings on the approach skis started loosening quite often. On the way down, it happened so often that it started to be a problem. I had to stop very often and re-fit the skis, often both. This caused me to lose both speed - and strength (and possibly a bit of patience). At the end, it was clear that I will need another solution for future winter summits. The short skis are great as a compromise, they fit into a backpack and work together with ice climbing shoes, but I need something that I can use to ski downhill properly - and that stays put on the boot, so I can trust it.

The Northern sun set behind the mountains, offering amazing views as I skied home. As I came back to the parking place, it was dark. After a brief good-bye, I started the car, hoping to be driving off to a hot meal and a few beers. But destiny had another plans for me. I found myself on the knees with a shovel, digging the car out of deep snow! I took the wrong turn in the dark and drove into soft snow trail, so the car sank onto its belly and span the wheels helplessly. I got some pushing help from the people who lived there, who told me "you're not the first one who parks the car in the snow like that". The car was freed, I thanked for the help and they told me "no worries, that's what we do around here". And off I went.

If you find such a trip interesting, or want to join for more challenging winter hikes or mountaineering, let me know. The plan is to set off again at the end of the winter. Email me or get in touch on Instagram!