Time to open the sailing season in Europe. I was contacted about crewing on a catamaran which I already had sailed on earlier. The boat was going to be moved to UK and I now opted for joining from Montpellier to the Atlantic.
To start with, there was a little bit of work on the boat, and a little bit of sight-seeing. There are some really amazing spots in this area, and I'd recommend anyone to see them! Old forts, vintage-futuristic cities, natural reserves, fishing towns... you can have it all.
The first days were long - I was longing for the sea but we were waiting for another crew. We went provisioning, looked at local flamingos, tasted the sand wines and swabbed the decks! Really, this is what life at port is like.
The first day of the sailing was done in adverse seas, which made for a slightly shaky start. There was an area with strong winds that we wanted to avoid, but at the same time it meant beating against the waves. The seas were only 1,5-2 meters high, but steep. That's much for a multihull, so there was a lot of motion and noise onboard. As we turned southwards, the going became easier.
The plan was to anchor off the Balearic islands. The port of Sant Antoni de Portmany became the choice for the intermittent spot after arriving. The restrictions made it possible to reprovision a bit, and even take a look around. It was a bit post-apocalyptic, all the venues empty and closed. I've never been to Ibiza before, so I don't have much to compare with, but the sight of the party places empty and fenced off was a bit depressing. Who knows what's gonna happen with the tourism industry? A few places were open, attracting guests - mostly Spanish tourists.

The next days were spent in light winds. Just like the saying goes - in the Med, you either have no wind, or all the wind (in the wrong direction). We motored a lot. Sometimes, we could make a few knots under the lightest sails. At night, the starry sky blended with the faraway lighthouses of Costa del Sol. The Milky Way was showing clearly, and below the boat the biolumiscence would light up as the water was gently disturbed by the hulls.

The dolphins were frequent visitors. Even at night, they'd come and play near the boat for a while. This time, I only saw pilot whales once. During the times when the boat was moving slower, we were able to see the marvellous play of these animals. It's almost like they know that they are being watched. 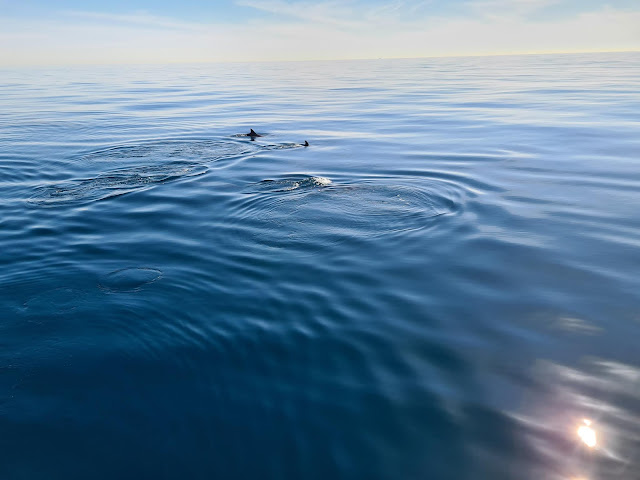 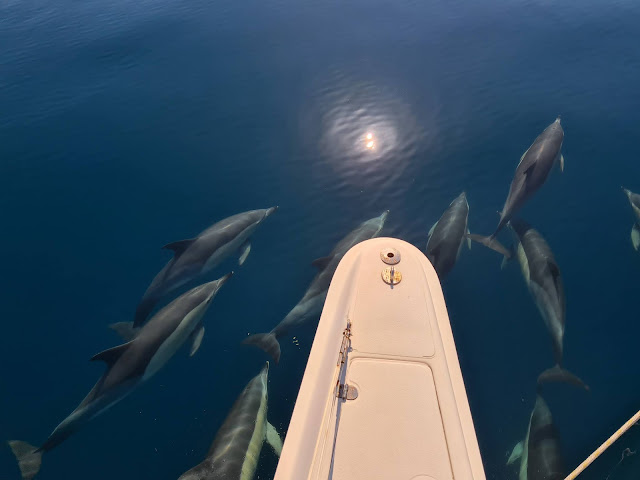 We went to Gibraltar without any more stops, and anchored for an hour to rest and wait for the fuel station to open, to get some less expensive local diesel. There is a dock where refuelling can be done without stepping on land, which is good because Gibraltar is not part of EU. The Covid regulations would make life difficult if leaving EU and reentering. It's nice they grant that possibility. 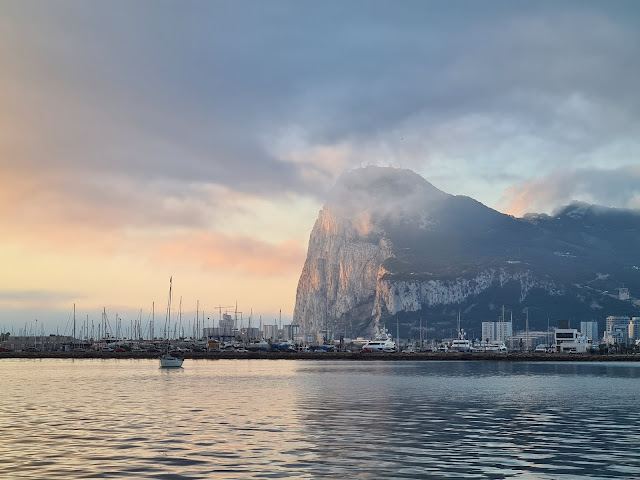 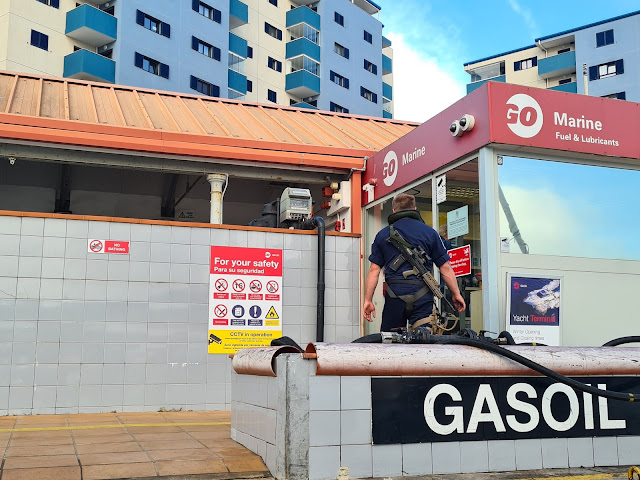 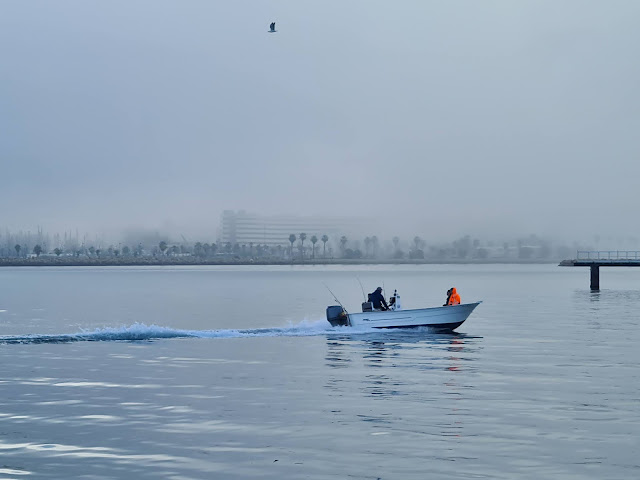 After fueling, we made for the Strait. The navigation around the bay is always tricky - thousands of lights, cargo ships and sailing vessels, fishing nets, tidal streams and so on. At night, the darkness made it even trickier. In the morning, a fog rolled in. Luckily, it stayed mostly over the land. We continued towards Tarifa, the southernmost point of continental Europe - and the border between Mediterranean Sea and Atlantic Ocean. The Spanish coast on our starboard, the North African mountains on the port. 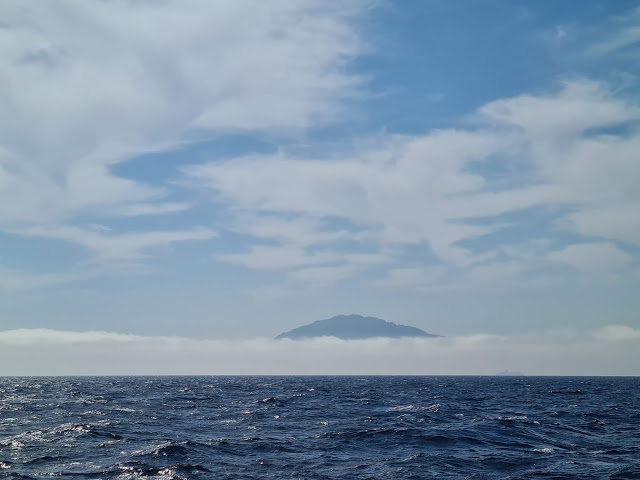 The idea was to wait at anchor until the tidal streams would turn.  There are a few anchoring spots, on both sides of Tarifa. There are beautiful waters, and a lot to see if it's possible to get on shore. I was exploring Tarifa many years ago as I was doing the around-the world sailing and changing boats in Gibraltar. So I was looking forward to seeing it again.
But why wait, why not continue? Well, there's a East-bound current of 2-3 knots at a rising tide, which would lower our speed and cause choppy seas against the wind. If the wind would be westerly, the current could build up to 6 knots, making it hard if not impossible to get out. So it would be better to wait, and to use the reverse current to pop out to the Atlantic like a Champagne cork!
At the same time, we knew that the next day would bring a change in the weather. A front was coming in with at least a week of westerlies, which would mean that in case we wouldn't make the passage prior to that then we'd have to struggle a lot to get out. So we decided against anchoring - we wanted to see how the going would be, and whether the currents were negotiable.
It turned out that it was indeed possible to sail along the coast! We were not slowed down as much as we expected, in fact we barely noticed the current. After a few hours, we were getting 0,5-1 knots of extra push from the tidal waters. That was great! We were flying along.
The W-SW winds would not allow us to anchor off the beautiful beaches along the way and rest, and the swell was building up. We made for the protected harbor of Cadiz, that we reached in the evening the same day! The low draft of the multihull allowed us to anchor well into the channel past the new bridge, a very nice opportunity given the choices.
From there, it was possible to get to land through the local yacht club. However, they were difficult to negitoate with, and wanted to get extra payment for landing there with the dinghy. I'd understand the cost if there were services - but they closed the club and therefore limited our time on land, that was a bit of a bummer. But we still got some time in Cadiz old town and the amazing beach! 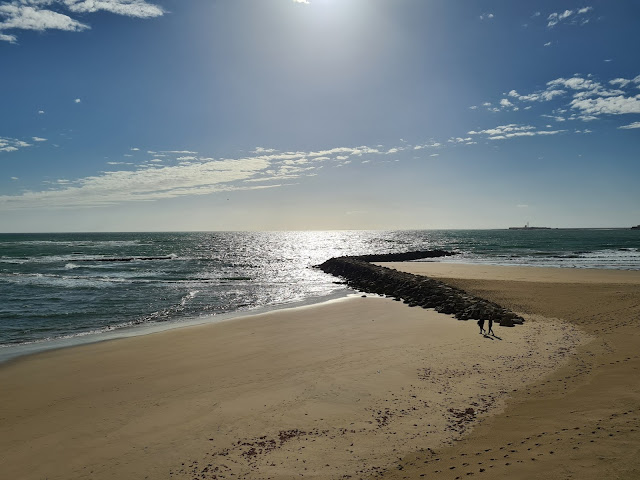 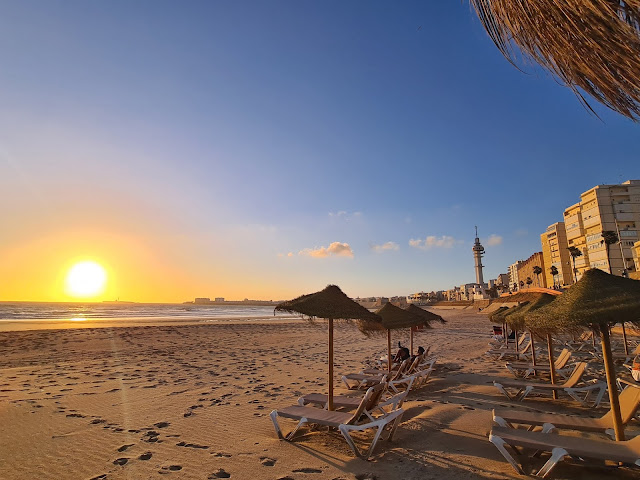 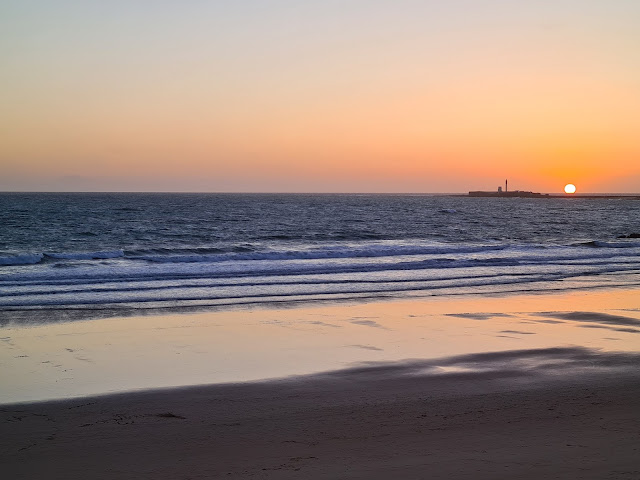 The next stop would be Portugal and Azores. I did not have the possibility to be away long anough to go to Azores, and did not want to end up in continental Portugal with their tough restrictions. Instead, I chose to desimbark in Cadiz. It was with a heavy heart, as I really enjoy being on board that boat. Sailing and sharing the daily life with the owner is a great pleasure - a knowledgeable, respectful, intelligent and fun skipper.
Also, the last crew to come on board in Montpellier, Véronique, was a treasure to sail with. Always helpful, always alert, always aware of the situation, always willing and able to do whatever task is needed, always keeping a few steps ahead - and at the same time so positive, sweet and easy-going. This is what a good sailor is like, a prerequisite of a good crew and a successful team effort. She and I share a lot in common in our life stories - just like me, she also quit the rat race at some point in time. Happy to be free and sail the world, a sailor sister.