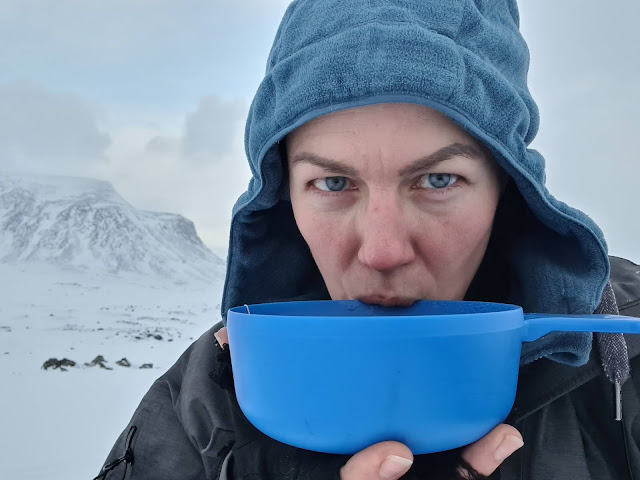 When did I decide to go on a winter trip to Sarek? Probably after reading the Vintersarek blog about a few guys spending three winter months there, while temperatures hit record lows. Or maybe while looking for untrailed territories in Sweden. Anyway, Sarek has become almost a magical word to me - associated with ragged peaks and long wide valleys, wilderness, no humans, no roads, wild animals, 2k-peaks and really good freerides.
Here, you'll find six out of the eleven 2000+ peaks in Sweden - that's half of the country's highest mountains. Here, there are countless peaks, about 200 of them are above 1800 meters. Here, there are almost 100 glaciers. Here, it's Laponian area, the native Sami territory. Here, we're above the Polar Circle.
To truly experience the National park of Sarek, you need at least 1-2 weeks. But you can walk around for more than a month and have different peaks, valleys and rides, all for yourself. The Kungsleden Trail touches the national park, but apart from that, there are no cabins - and no civilization. To get to the national park border, you need to ski for 2-3 days. Or, you can try to book a ride with a snowmobile, which will take a few hours and will set you back a few hundred Euro. It's all about how much time (and money) you have.
I had a window of 10 days to get there, ski around (I had a few destinations in mind), and to get back. The train from main Swedish cities to the nearest station takes over 24 hours! And then you've got the transportation to the national park. So I really did not have much time left after all.
I was hoping to bring some friends, and do it as a small group. The requirements to join was ample winter hiking experience, as Sarek is not for beginners. However, at the end nobody could come along - because of sickness, Covid restrictions, or other reasons. It's really not a problem - I'm used to solo adventures, also in the winter. But this also meant I would only do ski touring in the valleys, no climbing up the mountains and free riding. It's just too high a risk to do it alone. Also, I would not enter glaciers, and would avoid ice. In a group, it's possible to reduce risks - alone, it can be fatal.

This being said, the hike is not much different to any previous ones, apart from being further away from civilization. To combat the associated risks, I brought an Iridium unit to be able to communicate my position, and ask for assistance if needed. I also prepared back-up for all gear in case of failure. Together with the training I have, including the medical care in remote areas, it could ensure a safer trip.
I took the night train to Gällivare, to change to a bus to Kebnats. On the train, I met two ladies who also were going for winter adventures, although joining different guided groups. We had a great time discussing adventures and life, the evening passed very pleasantly. Maybe we will see each other elsewhere in the Arctic!
The train arrived an hour late to Gällivare, and the bus connection was missed - which was unfortunate for the dozen passengers who were to transfer to Kebnats and further to Saltoluokta. The train company found a solution to that - the bus got to turn around and pick us up! The other passengers on the bus were not very happy with it, because it cost them about an hour's delay. Better communication within Norrbotten traffic organisation would be good.
At last we were in Kebnats. But my ride was already gone! I got to come along STFs ride to Saltoluokta, and met my snowmobile driver there. It was time to go to the great unknown. I was dropped off at the "White Stone" (Vita Stenen), which is the boundary of the national parks of Sarek and Stora Sjöfallet. It's forbidden to drive snow mobiles (snöskoter) inside of the national park. The first few kilometers of the journey was through Stora Sjöfallets national park, and then I crossed Liehtjitjávrre and entered Sarek. Below the mighty Ähpár massive, I settled for the first camp. It was like a gateway to this place - suddenly the mountains were high and dramatic, the valley was endless and the beauty striking.
The next day was all about gaining kilometers. I rounded Bierikjávrre and followed the valley to northwest. As I tried to avoid any ice, I kept to a higher level, which meant crossing small ridges and more strenuous hike, but at least I did not need to bother about risk of falling through at a place where the ice is weak because of a strong water movement or anything else. The weather was great, the sun was shining and I had to wear sunscreen and shades.
Crossing the Ráhpajåhkå river at a shallow point, I rounded Ålkatj and entered the Álggavágge. By this time, the sun was getting low - as were my energy levels. I found a nice camp site to once again put up my tent, aligned to the wind and somewhat protected. However, the katabatic winds during the night gave the tent a good beating once in a while, so I did not manage to get good sleep.
The next day, sun was still shining but the wind built up and was quite bitey. I continued West, following the valley. It's hard to fathom how huge this place is. You can walk for hours... still at the foot of the same mountain, still in the same valley, still the same wind blowing on your side. I usually walk without stopping to rest, only pausing briefly to take some photos or adjust gear. Snacking is done while walking. Despite that, it takes forever to cover the distances needed.
Finally, I reached the Álggajávre lake. I pushed on - one of the destinations I have been dreaming about was just around the corner. Or, up the hill. See the next post here.